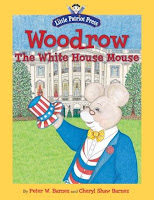 Woodrow G. Washingtail is back and ready to get to work as Commander-in-Cheese of the United Mice of America! A follow-up to Woodrow for President, Woodrow, the White House Mouse teaches children about the presidency, as well as the art, architecture and history of the White House. Written and illustrated by the bestselling and award-winning duo, Peter and Cheryl Barnes, Woodrow, the White House Mouse delights and amuses children as they learn about everything from inauguration day and the president’s duties to the Easter egg roll and the East Wing. Perfect for kids 5-8 years old, children will be educated and entertained as President Washingtail and his family work and play in the greatest mouse house of all.

Peter W. and Cheryl Shaw Barnes are the founders and owners of VSP Books, an Alexandria, Va., children's book publisher. It publishes educational books for children about special and historic places. Its work has been recognized by U.S. News and World Report, C-SPAN, National Public Radio, CNN, Child magazine, the National Council for the Social Studies and other news and educational organizations.

Cheryl Barnes.Cheryl is a self-taught artist who was born and raised in Alexandria. She graduated from Randolph-Macon Women's College with a bachelor's degree in political science. After working in the Washington, D.C., area, she moved to Los Angeles, where she co-founded an architecture firm. There she developed the love and appreciation for architecture reflected in her books. She and her family returned to Virginia in 1990. She is currently the Executive Director of the Wheelchair Foundation, a non-profit group that distributes free wheelchairs to developing countries. She is an honorary member of Delta Kappa Gamma, a teachers sorority, and is a member of the board of Northern Virginia Reading Is Fundamental.

Peter Barnes.Peter is a Washington-based broadcaster and journalist. He currently is the Washington Bureau Chief of Hearst-Argyle Television, which operates 27 network affiliate TV stations. Previously, he worked for TechTV and CNBC. In 1997, he won an Ace Award, the cable television industry's highest honor, for a documentary on the crisis in America's retirement system. He was born in Rochester, N.Y., and raised in Philadelphia, Pa. He graduated from Penn State University with a bachelor's degree in political science and earned a masters degree in finance from the University of Pennsylvania's Wharton School. Peter has also worked for several other news organizations, including the Wall Street Journal. He was a member of the board of directors of Kids Voting USA, Tempe, AZ, a non-profit educational organization dedicated to teaching children about the political process.

The Barneses have two children and live in Alexandria.

This is the second Woodrow book we have enjoyed together. The boys ages 5 and 7 were excited again to listen to the book. They then went to each page and had fun looking for the Presidential Seal.
As the boys are young, I explained some of the things in the book...they decided they would like to go to the Easter Egg Roll! I read to them how a President named Hayes and his wife Lucy were the first to open their South Lawn for the event.
Because the book has two Presidents...one human and one mouse. I went on to explain that right now two humans were running for the highest office in our land.
The boys loved hearing about the different rooms in the house, and were hysterical when one of the twins fell into the soup bowl.
This is such a delightful and educating book, and I am sure they will be wanting to here it again!