Revell Blog Tours Presents: My Journey to Heaven: What I Saw and How It Changed My Life by Lorilee Craker, Marvin J. Besteman 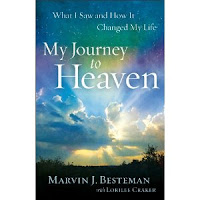 In My Journey to Heaven, Marv Besteman shares the story of his experience of heaven with astounding detail. Readers will hear of his encounters with angels who accompanied him to the gate, his conversation (argument, really) with St. Peter, and his recognition of friends and family members who touched his life.
On April 28, 2006, as he lay in his hospital bed in Ann Arbor, Michigan, visions of celestial beauty were the last thing on Marv Besteman's mind. He had just had surgery to remove a rare pancreatic tumor. It was after visiting hours and his family had left for the day. Alone and racked with pain, Marv tossed and turned, wanting more than anything else to simply sleep and escape the misery and discomfort for a while. The retired banker, father, and grandfather had no idea he was about to get a short reprieve in the form of an experience he never could have imagined.
Marv’s story offers peace, comfort, and encouragement to those who have lost loved ones and gives security and solace to those who are grieving, dying, or wonder about the afterlife. Marv believed God sent him back to earth to fulfill this mission of comfort and reminds readers that God has work for each of us to do before he calls us to be with him in heaven. Secure in his belief that his book was the fulfillment of his own mission, Marv returned to heaven in January 2012. 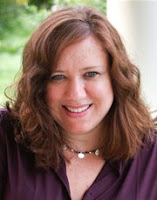 Lorilee Craker is the coauthor of the New York Times bestseller Through the Storm by Lynne Spears, and the author of several books on parenting and relationships. A frequent speaker, Craker is also an entertainment writer who has been interviewing celebrities and music artists for many years for the Grand Rapids Press. She lives in Michigan.

Ruth Besteman, Marv’s wife of 54 years, is available for interviews to discuss her husbands’ miraculous journey to heaven and how it forever changed not only his life, but impacted hers as well.

Marvin J. Besteman (1934-2012) was a graduate of Calvin College, a veteran of the US Army, and a retired bank president. He spoke frequently during his last few years of life about his experience of heaven. He and his wife, Ruth, are the parents of three children and the grandparents of four. Marv passed away in January of 2012, joyfully anticipating his return to heaven.

I found this book a compelling read...who doesn't want to know what Heaven is like. We have all heard that those who go through the light don't want to come back. Marvin Besteman, a stubborn Dutchman as he calls himself, was just operated on for a pancreatic tumor. He was in such pain the night after the surgery, and all of a sudden he felt himself floating free. No tubes, needles! For months after this experience he doesn't tell anyone.
The first person is his wife Ruth, and when she asked him if he had thought of her, he told her no. Was she disappointed? I think what happened was it was all so wonderful, that he didn't have time to think of anyone. What he describes is so very very wonderful, no wonder he didn't want to return.
I have recently lost my Husband, this book really touched my heart, and gave me a lot of peace. Marvin describes in detail the babies...lots and lots of them. In all stages of development from a few week old fetus to a full term. I have also lost a 77 day old infant, and to hear that they were all happy and laying on grass ...softer than any blanket. He said he didn't see anyone taking care of them, but knew some how they were all fine.
The colors he describes, the gates, the stone walls, and the throne. I could see it all through his eyes.
I will pass this book on for others to read, and I'm so glad I was given this opportunity to absorb all that is presented.
Of course I wanted more, and would have loved to sit down and speak personally with Marvin, but now it can never by. He did leave again and Saint Peter opened the gate earlier this year.

I received this book from the publisher Revell, and was not required to give a positive review.