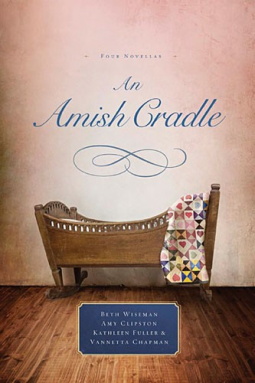 In the Father's Arms by Beth WisemanRuth Anne Zook is excited that she and her best friend are due with their children the same week. But when Ruth Anne's baby is born with Down Syndrome, she and her husband struggle to understand God's plan.A Son for Always by Amy ClipstonCarolyn and her husband Joshua are thrilled to be pregnant with their first child. A teenager when she had her son Benjamin, Carolyn still feels obligated to work to secure Ben's future, even though Josh adopted Ben. She struggles to realize that Josh will love and protect both of their children equally.A Heart Full of Love by Kathleen FullerEllie's mother loves to meddle in her personal life-especially now that Ellie's pregnant. Since Ellie is blind, her mother worries that she won't be able to handle the baby. When Ellie gives birth to twins, her mother insists on moving in. Just as everyone reaches the breaking point, a miracle draws them closer to each other and to God.An Unexpected Blessing by Vannetta ChapmanAt 42, Etta thought her time of having children was over, but she's pregnant again. She goes into labor during a blizzard, and complications with the delivery raise fear. Etta struggles to accept Gotte's wille for the baby and her son, David, who moved away two years earlier in search of what he would do with his life.

Award-winning, bestselling author Beth Wiseman is best known for her Amish novels, but she has also written several successful contemporary novels, set primarily in her beloved Texas, including Need You Now and The House that Love Built. Both have received glowing reviews. Beth's The Promise is inspired by a true story. Website: www.bethwiseman.com Twitter: @bethwiseman Facebook: Fans-of-Beth-Wiseman

Amy Clipston is a native of New Jersey, I’ve been writing for as long as I can remember. I often joke that my fiction writing “career” began in elementary school as I wrote and shared silly stories with a close friend. However throughout school, I only considered writing a hobby, and I never dreamt of being an author.
In 1991, I graduated from high school, and my parents and I moved to Virginia Beach, Virginia. My father retired, and my mother went to work full-time. I attended Virginia Wesleyan College in Norfolk, and I graduated with a degree in communications. I met my husband, Joe, during my senior year in college, a few days after my father had a massive stroke. Joe and I clicked instantly, and after a couple of months we started dating. We married four years later.
After graduating from VWC, I took a summer job with the U.S. Army Corps of Engineers, Norfolk District, which turned into an eleven-year career. I worked in the Public Affairs Office for four years and then moved into Planning as a writer/editor.
During that time, I continued writing for fun. It was something I did to escape stress and unwind. I didn’t share the stories with anyone except for a couple of close friends. In fact, I was even afraid to admit to my husband that I wrote.


Kathleen Fuller is the author of several bestselling novels, including A Man of His Word and Treasuring Emma, as well as a middle-grade Amish series, The Mysteries of Middlefield. Website: www.kathleenfuller.com Twitter: @TheKatJam Facebook: Author Kathleen Fuller

Vannetta Chapman is author of the best-selling novel A Simple Amish Christmas. She has published over one hundred articles in Christian family magazines, receiving over two dozen awards from Romance Writers of America chapter groups. She discovered her love for the Amish while researching her grandfather's birthplace of Albion, Pennsylvania.

The first story by Beth Wiseman will make your heart ache, to have an imperfect child is so very hard. All that anticipation looking forward to the birth, and then the heartache of not knowing what to do, or how to cope, and it is the same feeling no matter which culture we live in?
That is what Ruth Anne and Levi must come to terms with, to be there for their child and each other. As we read along we hope they will find their way, and be there for each other.
Carolyn and Joshua are about to welcome a new addition to their new family. Joshua has now adopted Ben, but Carolyn is worried, and has deep fears that once the new little one comes, Joshua won’t feel the same about Ben. How can she give up her income and feel secure that her child will be taken care of? The power of prayer, she just needs to lean on her faith, but can she?
Kathleen Fuller’s novella, will bring tears to your eyes, so much tragedy in their past. Elle has over come most of the problems she has faced with her blindness, and now she a Chris are expecting their first baby. What surprises they are in for, and trying to keep her mother from taking over because of her handicap, you are going to love how Chris handles her.
The final novella is by Vannetta Chapman and at 42 Etta has a new baby, but is yearning for the return of her son David. Loved how God has placed the love of each child on these parents hearts, even if the rules of their religion is contrary to how they feel.
These stories will warm your heart, and as you can tell by the title, there is a new baby involved. You can read one in a sitting, but hard to stop at one. Enjoy!