Written on the Wind (The Blackstone Legacy, #2) by Elizabeth Camden 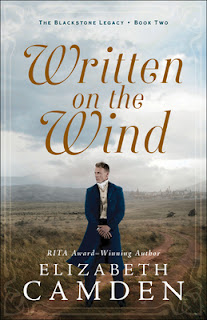 He carries a dangerous secret, but can he survive long enough to expose it?

Count Dimitri Sokolov has been charged with overseeing construction of the legendary Trans-Siberian Railway, but during this work, he witnesses an appalling crime, the truth of which threatens the Russian monarchy. In an effort to silence him, the czar has stripped Dimitri of his title, his lands, and his freedom . . . but Dimitri has one asset the czar knows nothing about: his deep and abiding friendship with Natalia Blackstone.

Natalia is the lead analyst for her father's New York banking empire and manages their investment in the Trans-Siberian Railway. Her bond with Dimitri has flourished despite the miles between them, but when Dimitri goes unexpectedly missing, she sets the wheels in motion to find him. Once they join forces, they embark on a dangerous quest in which one wrong move could destroy them both.

From the steppes of Russia to the corridors of power in Washington, Dimitri and Natalia will fight against all odds to save the railroad while exposing the truth. Can their newfound love survive the ordeal?
Amazon
About The Author

Elizabeth Camden is best known for her historical novels set in gilded age America featuring clever heroines and richly layered storylines. Before she was a writer, she was an academic librarian at some of the largest and smallest libraries in America, but her favorite is the continually growing library in her own home. Her novels have won the RITA and Christy Award, and she lives in Florida with her husband who graciously tolerates her intimidating stockpile of books.
My Review

I loved this story, as with the first book in this series, we are with the Blackstone banking family. I enjoyed being reunited with past characters, and and how they carried on in this read, but, yes this can be read alone!

This is Natalie and Count Dimitri Sokolov's story, and we are dealing with the Trans-Siberian railroad, full of historical facts, and how the relationship grows between these two.

Be ready for some chuckles, some sweet romance, and some horrors perpetrated by those that could, injustice, and those who want justice!

This quickly became a page turner, and keep reading the epilogue, heart warmer!

I received this book through Net Galley and the Publisher Bethany House, and was not required to give a positive review.
at May 03, 2022