Book: Not by Sight

Seventeen-year-old Joseph’s life is far from perfect. He does have his father’s favor and trust, and the love of his younger brother Benjamin and sister Dinah. What he does not have is the love of his ten older brothers. Embittered by their father’s favor towards Joseph, his brothers take every opportunity to spite him. Spurred to anger by their actions and horrified by a threat made towards Benjamin, Joseph, overcome with fury, tells them of his dreams – for his dreams show a future where they will bow down to him.

Outraged, his brothers take their revenge, and Joseph is sold into Egypt as a slave. Bitterness and hate threaten to overcome him, and, in desperation, Joseph turns to the stories of his father’s God, a distant and omnipotent being whom Joseph has never dared to speak to. Slowly, Joseph begins to pick up the pieces of a shattered life. But only when those carefully gathered pieces re-break, over and over again, does Joseph truly begin to understand what it means to “walk by faith, not by sight” (2 Corinthians 5:7).

Elizabeth Jacobson is a middle-school math teacher in sunny California who loves the Bible, fantasy, and science fiction. She got bit by the writing bug at age thirteen and has been frantically putting words on pages ever since. Her goal in writing is to share with the world the most important message anyone can express: the Love of God and His Son, Jesus Christ.

Not by Sight: A novel of the patriarchs is her first novel. You can connect with her at headdeskliz.com or on Facebook or Instagram.

Imagine you’re back in Sunday School, sitting down with all your friends and watching the volunteer parent who teaches the class smile over the flannelgraph. (Or, if you never went to Sunday School, just imagine yourself in a smallish room with too many little friends around you, and an adult who doesn’t want to mess this up running the class.) “Now, friends,” (s)he says, holding up a flannel image of a teenager in what looks like a rainbow bathrobe: “This is Joseph.”

Joseph is plastered to the flannelgraph, and the parent puts up a flannel group of angry men next to him. “His brothers hated him because his father gave him a beautiful coat. They threw him in a pit and sold him as a slave!”

Appreciative gasps echo from the crowd of five-year-olds – even kids know that good drama comes from torturing your characters.

“His master threw him in prison – ” (we necessarily skip why) “– but one day Pharaoh had a dream!”

Flannel Pharaoh appears, slapped on the flannelgraph, wearing a white skirt and lots of bling.

“Joseph interpreted the dream, and Pharaoh made him his second-in-command. When Joseph’s brothers came to Egypt looking for food in a famine, Joseph helped them. And you know what, friends?” The parent looks around with a grin. “Joseph never lost his faith in God! Isn’t that amazing?”

You and your friends nod solemnly. What a guy.

You probably hear this story at least once a year in Sunday School, with more detail added each time, but by the time you’re a worldly-wise sixth grader, you start to nod a little less and frown a little more.

You know the story like the back of your hand.

But it doesn’t make any sense anymore.

The truth is that this version of Joseph, whose flannel avatar has been waved in your face for years, this icon of the Sunday-School world, isn’t a person to emulate. He can’t be emulated.

Because the story of a man who faced every unthinkable hardship thrown his way with a smile on his face and praise on his lips and forgiveness in his heart is. Not. A. Story. Of. Real. Faith.

You want real faith? Look at the guy who talked to Jesus in Mark Chapter 9. “Lord, I believe; help my unbelief!”

Translation: “I know I’m supposed to trust You, but in this moment, I don’t. Please help me out!”

Humans aren’t perfect. Why then are we shown a perfect Joseph?

Various adaptations of the Joseph story have tried their hand at mitigating the perfect Joseph problem. For the musical Joseph and the Amazing Technicolor Dreamcoat, the whole thing is played so humorously that character exploration ranks at exactly nil, and no one questions anything Joseph does. For the perennial Sunday-School favorite Joseph: King of Dreams cartoon movie, God and faith are taken mostly out of the story, so Joseph is free to be an “ordinary person” who reacts accordingly. (Do you see the problem with this last idea? I hope you do. faith ≠ superhuman).

Other adaptations have tried as well, but this fantasy and science fiction writer was one day struck with the need to try it for herself. I loved the story (remember, torturing characters = good drama, and boy does Joseph get the – extremely – short end of the stick for a good chunk of his life) and secondly, because I knew it would be a challenge.

Part of the reason for this “perfect” Joseph we so often see in Sunday School is that the Bible is not written as a novel. Most narratives in the Bible go over the events needed to comprehend the message or information in bare-bones, rapid-fire succession. No fluff involved, no discussion of motives, internal conflict, or thought processes. The Joseph account in Genesis is unique in that it is one of the longest continuous narratives in the Bible, but even it gives very little in the way of discussing these storytelling necessities.

The goal then became to come up with consistent personality traits and motivations, and logical, human reactions to events, that would lead each player in the Joseph narrative to take the actions recorded in Genesis. I felt like an archaeologist, piecing together ancient clues that could lead me to a bigger, more complete picture of the story.

It was a wild ride, but I had an absolute blast writing it. I can’t wait to share Not by Sight: a novel of the patriarchs with you!

Inklings and notions, May 8

For Him and My Family, May 9

Locks, Hooks and Books, May 12

For the Love of Literature, May 14 (Author Interview)

Truth and Grace Homeschool Academy, May 16

Blogging With Carol, May 18 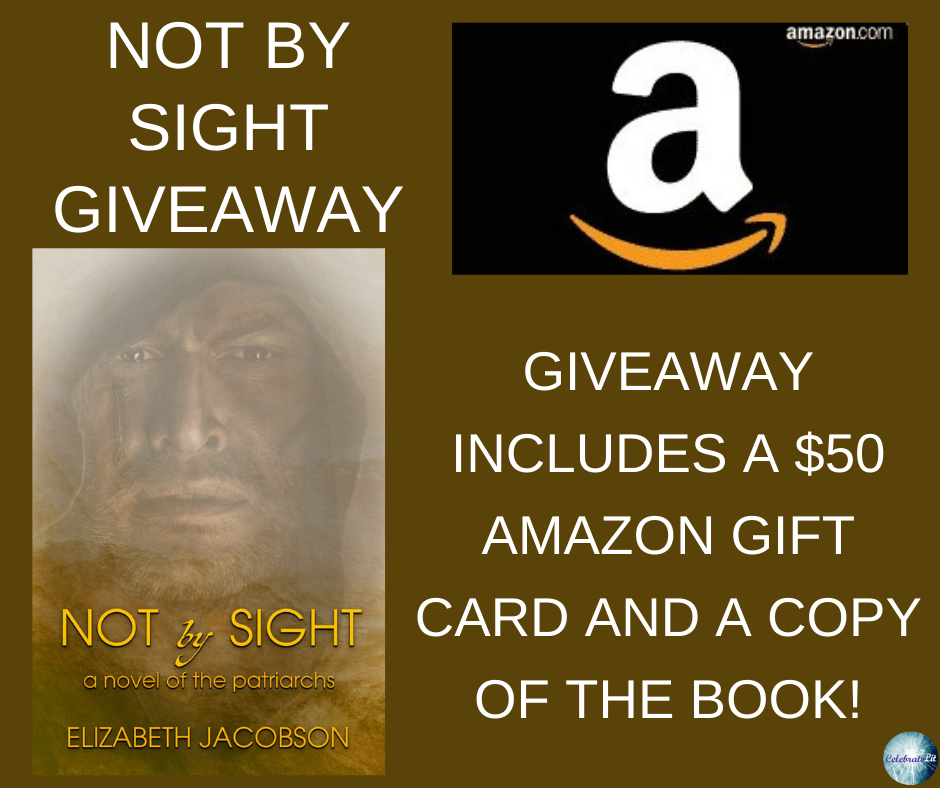 To celebrate her tour, Elizabeth is giving away the grand prize package of a hardcover copy of Not by Sight: a novel of the patriarchs, combined with a $50 Amazon gift card!!