A Journey She Did Not Choose Will Change Her Life Forever

Transported surreptitiously to a terrifying alien world, with limited resources and only a few cryptic words to guide her, Callie Hayes finds herself engulfed in a perilous battle for freedom – for her very life. After agreeing to participate in a routine psychology research experiment, she must unravel the mysteries shrouding her only route of escape or risk succumbing to the deadly deception of the Arena.

Karen Hancock has won Christy Awards for each of her first four novels—Arena and the first three books in the Legends of the Guardian-King series, The Light of Eidon, The Shadow Within, and Shadow over Kiriath. She graduated from the University of Arizona with bachelor’s degrees in biology and wildlife biology. Along with writing, she is a semi-professional watercolorist and has exhibited her work in a number of national juried shows. She and her family reside in Arizona.

Arena was not my first novel. The Light of Eidon was. In those days, however, Christian publishers were not interested in the fantasy genre because it had too much magic and wizards and such, despite the publication of the works of C.S. Lewis and J.R.R. Tolkien. They were softening to science fiction, however, and thanks to Kathy Tyers, Randy Ingermanson, John Olson and others the door was opened in 2001 for what is called “speculative fiction.” Arena fit right in, and was published by Bethany House in 2002. It went on to win a Christy Award, which started the ball rolling for the Guardian King series. Three out of the four Guardian King books in that series also won Christy Awards, at which point I was the first speculative fiction author inducted into the Christy Award Hall of Fame in 2013.

I am thrilled to have Arena appear again in this 20th anniversary edition with a new cover and in limited-edition hardcover. Oasis Audio will also be producing the audiobook, for the first time, so it can be available for every type of reader.

Inside the Wong Mind, April 30

For the Love of Literature, May 1 (Spotlight)

Beauty in the Binding, May 2 (Spotlight)

Inklings and notions, May 4

For Him and My Family, May 5

Locks, Hooks and Books, May 7

Because I said so — and other adventures in Parenting, May 10

Blogging With Carol, May 11

Truth and Grace Homeschool Academy, May 12

Through the Fire Blogs, May 13 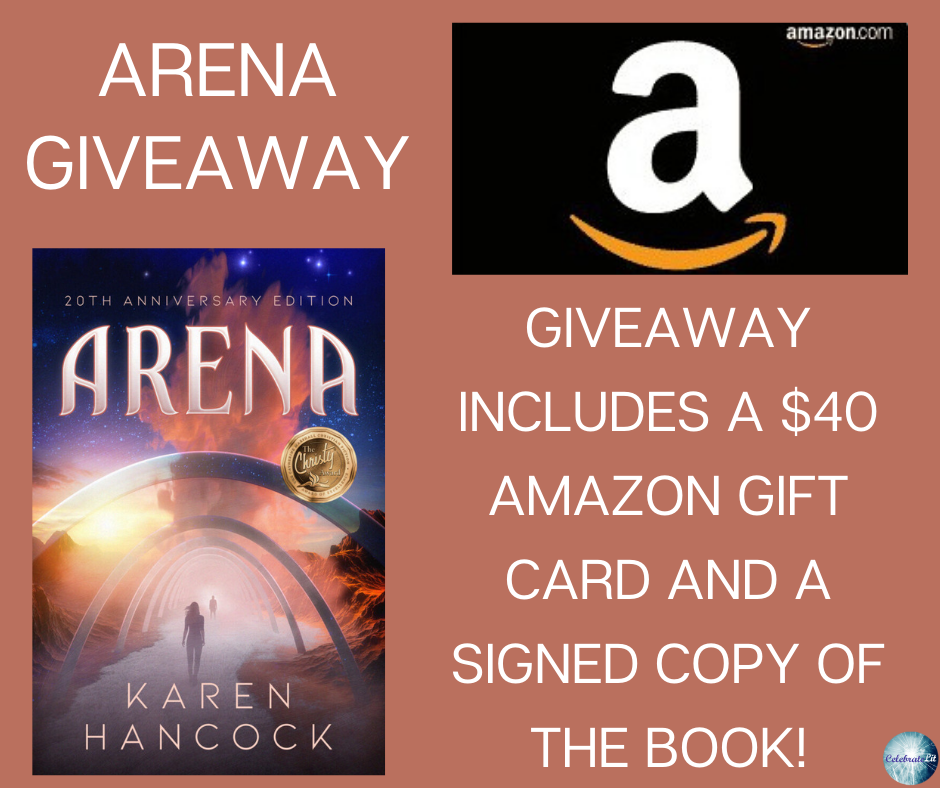 To celebrate her tour, Karen is giving away the grand prize of a $40 Amazon gift card and signed copy of Arena!!