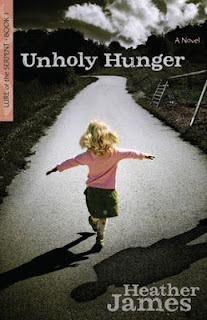 Unholy Hunger: A Novel (Lure of the Serpent #1) by Heather James

Evelyn Barrett wants to die. As long as her daughter's murderer dies with her, she is ready to go. Why did this man--this stranger--destroy her family? Why has he not been brought to justice? Why is she forced to live a life of anger and grief? Amid a million questions she cannot answer, Evelyn knows one thing for sure: this murderer must be punished for his crime.
Before it all, she was a successful attorney who won all the hard cases. Now that the case is personal, Evelyn will stop at nothing to seek her own version of justice. When another girl goes missing, Evelyn plows forward, ignoring the warnings from police detectives, the pleas of her grief-stricken husband, and the strange, almost supernatural tingles that tug at her. But as she follows the stench of evil, Evelyn learns that the hardest thing she will have to face may not be the death of her child after all. Perhaps the harder lesson is this: the ultimate truth--of crime and verdict, of life and death--cannot be swayed by a mother's revenge.


In this first book of a new, page-turning series, a woman will be brought to her limits before she finally recognizes the movement of the Holy Spirit and reconnects with the source of true peace. 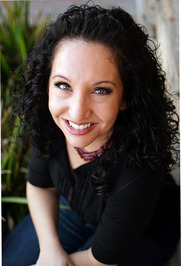 Heather James is the author of the upcoming “Lure of the Serpent” Series through Kregel Publishers, suspense novels that pack quick wit into the high heels of attorney turned vigilante, Evelyn Barrett.  In addition, Heather is a practicing lawyer and columnist in California. Her columns focus on the humorous aspects of marriage and parenthood. Heather is married and primarily works at home, raising two young sons.

What a heart ripping story. Heather James has written a powerful, and page turning read. It reads really fast, because you want answers.
Evelyn Barrett seems to have it all...she is a top lawyer and has made mega bucks. She has a wonderful husband Eddie, and a delightful, fun, little four year old, Corrine. She appears to have a wonderful life, when darkness descends, and she is about to loose it all.
A filthy beast, a force so evil, has descended on Eddie and Evy, and stolen their child. When their Nanny falls asleep while the little one is playing, she is stolen and murdered.
How would one deal with this, God speaks to Evy, but she doesn't always listen, with disastrous results. One result was, in a way good, but would you want it? She started to smell pedofiles, and she does manage to help the police department, maybe.
Will the marriage of Eddie and Evelyn be able to survive this, and if so how? Will she be able to find the person responsible? The answers are here, along with the pain.


I was provided with a copy of the book through Kregel Publishers, and was not required to give a positive review.