Join Anne Patrick, author of the inspirational romantic suspense book, Betrayal: Wounded Heroes Series Book 3, as she tours the blogosphere March 18 through April 12 on her first Book Blast with Pump Up Your Book! Anne will be giving away a $25 Amazon GC/Paypal Cash to one lucky reader! To enter, fill out the Rafflecopter form on the participating blogs below anytime during the tour and good luck! 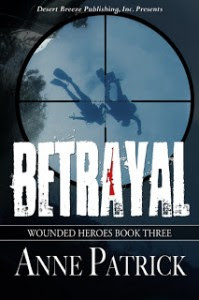 Drew Presley's wife was murdered while he was serving his country in Iraq. Giving up a career he loved, he's returned to Dauphine Island to care for his son and try to make a new life for them. The unsolved murder of his wife continues to plague him. The islanders are very protective of their own and he fears a killer is among them. The more he searches for answers though the more dangerous it becomes. Just as troublesome is his attraction to his son's second-grade teacher. Trudy Walsh was Nora Presley's best friend so the bond she has with Nora's motherless child is only normal. What troubles Trudy is the growing feelings she has for Reed's father. How can she be so attractive to one man when Jack Diamond is all she's ever thought about? What secrets lie in Gianni's Cove, and what do they have to do with Nora's murder? 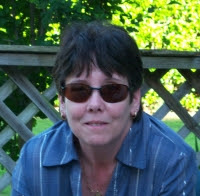 Anne Patrick is the author of more than a dozen novels of Romance, Mayhem & Faith, including the award winning and bestselling WOUNDED HEROES SERIES, FIRE AND ASH, and TIES THAT BIND. Her books have garnered four-star reviews from Romantic Times, 'Top Pick' and 'Best Book' honors from Night Owl Reviews and Long and Short of It Reviews, and Five-Heart reviews from The Romance Studio. When she isn't working on her next novel she enjoys spending time with family and friends, and traveling to foreign countries to experience new cultures and adventures. Born and raised in Oklahoma, she now makes her home in Kansas.

Pump Up Your Book and Anne Patrick are teaming up to give you a chance to win a $25 Amazon Gift Card or Paypal Cash!

Here's how it works:

Each person will enter this giveaway by liking, following, subscribing and tweeting about this giveaway through the Rafflecopter form placed on blogs throughout the tour. This promotion will run from March 18 through April 12. The winner will be chosen randomly by Rafflecopter and announced on April 13. Each blogger who participates is eligible to enter and win. Visit each blog stop below to gain more entries as the Rafflecopter widget will be placed on each blog. If you would like to participate, email Tracee at tgleichner(at)gmail.com. What a great way to not only win this fabulous prize, but to gain followers and comments for your blog, too! Good luck everyone!

Monday March 18 - Beyond the Books

Thursday, April 4 - As the Pages Turn

Friday, April 12 - Between the Covers

If you would like to join this book blast, leave a comment below with email information or email Tracee directly at tgleichner (at) gmail.com.