Tyndale Blog Tours Presents: Take a Chance on Me by Susan May Warren 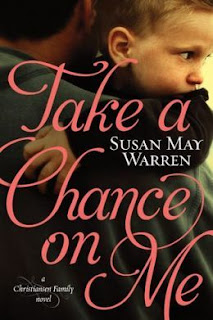 Caught between new love and old grudges, Darek must decide if he can set aside the past for a future with Ivy—a future more and more at risk as an approaching wildfire threatens to wipe out the Christiansen resort and Deep Haven itself.

Susan May Warren is the bestselling, RITA Award–winning author of more than forty novels whose compelling plots and unforgettable characters have won acclaim with readers and reviewers alike. She served with her husband and four children as a missionary in Russia for eight years before she and her family returned home to the States. She now writes full-time as her husband runs a lodge on Lake Superior in northern Minnesota, where many of her books are set. She and her family enjoy hiking, canoeing, and being involved in their local church.

Susan holds a BA in mass communications from the University of Minnesota. Several of her critically acclaimed novels have been ECPA and CBA bestsellers, were chosen as Top Picks by Romantic Times, and have won the RWA's Inspirational Reader's Choice contest and the American Christian Fiction Writers Book of the Year award. Five of her books have been Christy Award finalists. In addition to her writing, Susan loves to teach and speak at women's events about God's amazing grace in our lives.

For exciting updates on her new releases, previous books, and more, visit her website at www.susanmaywarren.com.

My Review:
This is the first book in the Christiansen Family Novel series. It was such a good read, and I am thrilled to know there is another book coming!
The Author shows how most of the characters in this story need to find forgiveness. They blame God for their circumstances, and won't take his gift of redemption.
Darek Christiansen is mad at the world, feels he has been handed a rotten deal, and the only good thing in his life is his 5 year old son Tiger. He was a willing player, but now feels life has not been fair to him. Then his wife was killed by his best friend....it was an accident and he knows it, but would rather blame his friend.
Enter Ivy Madison, a sweet young woman, she has taken a job as Assistant DA in Deep Haven, MN. She has had a scarred upbringing, having lived in fourteen foster homes. For someone who had such a horrible start in life, she has a lot of compassion.
The Lord does put people in their lives to help them find what they need...HIM, but will the accept? Or will they go on blaming God for their problems?
I did love being back in Deep Haven, MN, the area sounds so beautiful, and Susan May Warren brings it to life. Be set for a bit of romance, mystery, grief, and some great family love. A wonderful book to get lost in.

I received this book from the Tyndale Blog Network, and was not required to give a positive review.
at April 04, 2013