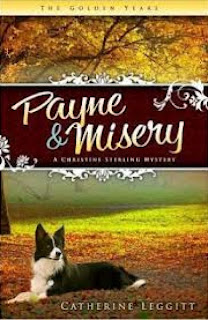 ABOUT PAYNE AND MISERY

Christine Sterling has developed a reputation for jumping to wild conclusions. With such an imagination, who is likely to take her seriously when she discovers a bruised and neglected neighbor named Lila Payne? Try as she might, she cannot interest anyone in Lila’s dire need for immediate rescue. Something about crying wolf once too often.
But then Lila and Christine’s beloved dog Molly both disappear the same night.
If no one will help her, she must find Lila and Molly herself. Heedless of possible consequences, Christine dives headfirst into a dark pool swirling with muddy secrets and misery. Her best friend throws her a lifesaver of prayer and soon she begins to sense God at work. But even with God’s help, can Lila and Molly be saved before it’s too late?

Catherine Leggitt is an author and inspirational speaker. A native Californian born in the Bay Area, she raised two daughters, taught school, and cared for her aging parents in southern California before retiring to the north end of the state. Proud grandmother of six brilliant children, Catherine studies the Bible, reads, serves as a leader in Bible Study Fellowship, and sings in the church choir.
Catherine wrote a trilogy called the Christine Sterling Mysteries, which include PAYNE & MISERY, THE DUNN DEAL, and PARRISH THE THOUGHT. The first book won 2nd place at the Orange County Christian Writers Conference in May, 2010. It was published by Ellechor Publishing in 2011. THE DUNN DEAL and PARRISH THE THOUGHT were published in 2012 by Ellechor Publishing. PARRISH THE THOUGHT made the quarterfinals in the 2011 Amazon Breakthrough Novel Contest.
In addition, Catherine has completed a fourth novel with different characters called DYING TO BE NOTICED and coauthored a memoir for Sam Contino called STREET SMARTS.
When called upon to share her story, Catherine’s main themes come from Christine’s struggles in her books, which also happen to be some of the things Catherine struggles with. Thus, since PAYNE & MISERY addresses complaining, the first message, titled Always Choose Joy, centers on how to be thankful and choose joy instead of misery. The spiritual theme of THE DUNN DEAL exposes with the nature of truth. Merely having faith is not enough. What we believe matters. Catherine named the second talk, Always Choose Truth. In PARRISH THE THOUGHT, Christine learns to love unlovable people, so Catherine calls the third message, Always Choose Love.

Poor Christine Sterling has been moved by her husband away from her children and her friends. Now she seems to be spending her time snooping, and trying to guess why someone is doing what they are doing. Every time she goes anywhere she suspects someone. So when she sees something at her neighbors, she is off on her adventure. In my mind and her husbands, she does cross the line.
When you think things can't get any more dangerous with Christine, her beloved dog Molly disappears, along with her mysterious neighbor Lila. In the beginning, no one, including Jesse, her husband, believes her suspicions. Once Molly is gone, Jesse, and her friends rally for her. She still makes some bad decisions, and it will keep you on pins and needles. You feel like you are right there. You want to yell "get out of there" to Christine, its a wonder she doesn't get arrested.
Will Christine and Jesse be able to weather these storms, or will they be driven apart. Will Christine finally get her curiosity under control?
You will also find some great chuckles in this story. you will be very surprised at the lengths she goes to.
All in all a real enjoyable read!!

I received this book through Pump Your Book Publicity Tours, and was not required to give a positive review.
at April 25, 2013