Chimney Bluffs by David B Seaburn 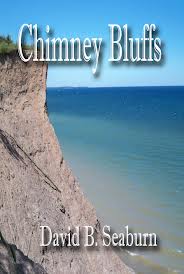 When state park ranger Clancy Brisco discovers two bodies and two sacks at the bottom of 300 foot high Chimney Bluffs, he is shocked. When he discovers what is in the sacks, his life is changed forever. Chimney Bluffs is a story about the power of relationships to foster hope and enable healing.
Kate and Mitch Duncan adore their young son, Danny; when he dies unexpectedly after a brief illness, they are inconsolable. Mitch believes their only option is to join their son in the afterlife so he will not be alone; Kate agrees to Mitch’s proposal of suicide, not because she believes in the afterlife, but because she feels responsible for Danny’s death. They put two sacks in the back of their VW van, one containing their son, the other containing his toys, and go to their favorite place, Chimney Bluffs, Ice Age spires carved out of the Lake Ontario shoreline. Mitch jumps to his death; Kate lives.
Clancy and his young co-worker and friend, Bobby, are overwhelmed by what they find in the sacks. Clancy, furious at what he thinks has been the murder of a little boy, curses Kate as she lies silent on the shore.
Over the course of several months, Clancy, Bobby and Kate will not only become friends, but will live together, their private stories mingling in an unexpectedly transformative way. Clancy, the failed husband who always hoped for a family; Bobby, whose brother’s death when he was a boy destroyed Bobby’s relationship with his father; and Kate, who struggles with loss and guilt and, in the end, healing and hope.
Purchase Link:

David B. Seaburn is the author of three previous novels, including Charlie No Face, which was a Finalist for the INDIE Excellence in Books Award in 2011. Seaburn is a retired family psychologist and Presbyterian minister. Seaburn lives in Spencerport, NY; he is married and has two adult daughters and two wonderful granddaughters.

As parents Kate and Mitch Duncan experience the worst thing that can happen to anyone, their four old, Danny, dies. They can't deal with this, and Mitch convinces Kate, they need to join Danny.
Enter two Chimney Bluff two unsuspecting Park Rangers, who are about to see a horrific sight. Unknown to them Danny was already dead, Mitch no sign of life left in him, but Kate is very much alive? How??
The Rangers Clancy and Bobby, also have baggage. We learn how cruel some people can be. Whether it is a spouse or parents, they can leave lasting scars. The author has done a good job of bring us through some of these very painful moments.
I live not to far from the area this story takes place in, and there is quite a bit of fiction, but there is also some know names and places. I enjoyed this very quick read, and wanted more at the end.