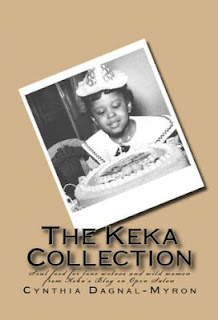 The Keka Collection is a compilation of blog posts from “Keka’s “Blog, once one of the most popular blogs on Open Salon.

Cynthia Dagnal-Myron is an award-winning former reporter for both the Chicago Sun Times andArizona Daily Star. She is also the first black woman to become a rock critic for a “major metropolitan daily,” and her articles appeared in Rolling Stone and Creem, under the tutelage of legendary rock critic Lester Bangs. But one day…she just walked away from all of it. And never looked back. This is her story, as told via Keka’s Blog, at Open Salon. Her current book is  The Keka Collection