The Bridge to Cutter Gap Christy of Cutter Gap, Book 1 by Catherine Marshall 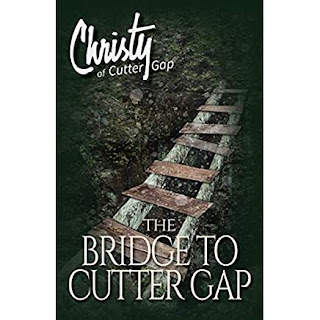 Christy Huddleston's dream was to teach the poor mountain children. But she never imagined that the treacherous journey into the heart of the Smoky Mountains would bring danger into the lives of one mountain family.

Join Christy as she crosses the bridge from the familiar world of parties and pretty things into the strange, new world of Cutter Gap. There she meets the country doctor, Neil MacNeill, who needs her help to save a man's life. And the handsome young minister, David Grantland, rescues Christy when her own life is in danger, and helps her face the challenges of teaching - and loving - the proud mountain people. Marshall was born in Johnson City, Tennessee.[1][2] She was the daughter of the Reverend John Ambrose Wood and Leonora Whitaker Wood.[1] From the age of nine until her graduation from high school, Marshall was raised in Keyser, West Virginia,[1] where her father served as pastor of a Presbyterian church from 1924 to 1942.[1]

While a junior at Agnes Scott College, she met Peter Marshall, marrying him in 1936.[1] The couple moved to Washington, DC, where her husband served as pastor of the New York Avenue Presbyterian Church and Chaplain of the United States Senate.

In 1940, Marshall contracted tuberculosis,[1] for which at that time there was no antibiotic treatment. She spent nearly three years recovering from the illness.[1] Her husband died in 1949 of a heart attack, leaving her to care for their 9-year-old son, Peter John Marshall. He later also became a minister and author.

Marshall wrote a biography of her husband, A Man Called Peter, published in 1951. It became a nationwide success and was adapted as a film of the same name, released in 1955. Her success encouraged her to keep writing.

Marshall wrote or edited more than 30 books, which have sold over 16 million copies.[citation needed] They include edited collections of Peter Marshall's sermons and prayers, and her own inspirational writings. Her most successful books were A Man Called Peter (1951); and her novel, Christy (1967), which was inspired by the story of her mother's time in the mountains teaching the impoverished children of Appalachia. Christy was adapted as a CBS television series, starring Kellie Martin, beginning in 1994.


In 1959, Marshall married Leonard LeSourd,[1] who was the editor of Guideposts Magazine for 28 years. Together they founded a book imprint, Chosen Books.[citation needed] They had three children, Linda, Chester and Jeffery.[3]

A book by author Catherine Marshall for middle grade and above, a story set in the Tennessee Mountains, a proud people, although poor, wanted an education for their children.
A journey, from an upscale life to the unknown, and we see through her eyes the beauty of this area, and meet these humble people first hand, and are with her as she begins her teaching career.
I love that there is a choice for a Christian read for our children, and this book is a glimpse back in history.

I received this book through Net Galley and the Publisher Gilead, and was not required to give a positive review.