The Honest Warrior by Daniel Banner
Baron Luzader, former Navy SEAL, never liked to talk … until he was forced to do it as part of his post-service therapy. Now, he finds his free tongue gets him in trouble more often than not, especially when he’s assigned to work a surveillance mission with a brilliant, beautiful woman. Eight years in Special Ops didn’t prepare him for Nessa.
Nessa Dimmick finally has a chance to prove herself in her field of Information Management. The biggest perk of the new job turns out to be her hunky partner, a former Navy SEAL with a great smile and no filter on what he says. Baron is different than anyone she’s ever worked with and his constant stream-of-consciousness compliments keep her blushing. She’s new to this whole partner thing, however, and they both have to figure out that trust goes both ways.
When their surveillance takes them across the Mexico border, Nessa wants to prove herself in the unfamiliar environment and gets in over her head. If she can’t learn to trust Baron, her actions could put the two of them and their relationship in danger.


Get your copy on AMAZON
Read for FREE on Kindle Unlimited

This book is great! The chemistry between the two main characters jumps off the page. You will love laughing with them and falling in love with them. There is also some suspense in this sweet romance. ~Sue Stinnett

This is a refreshing and heartwarming romance with charming and unique characters that draw you in from the very beginning. ~Goodreads Review

Author Daniel Banner
Daniel Banner, a 15-year fireman and paramedic, collects experiences by day and makes up stories by nights, and sometimes vice versa. For Daniel, writing is an escape from the traumatic days, and a celebration of the triumphant days.

Giveaway Details
Ends 10/8/18
Open only to those who can legally enter, receive and use money sent via Paypal or gift codes via Amazon.com. Winning Entry will be verified prior to prize being awarded. No purchase necessary. You must be 18 or older to enter or have your parent enter for you. The winner will be chosen by rafflecopter and announced here as well as emailed and will have 48 hours to respond or a new winner will be chosen. This giveaway is in no way associated with Facebook, Twitter, Rafflecopter or any other entity unless otherwise specified. The number of eligible entries received determines the odds of winning. This giveaway was organized by Kathy from I Am A Reader and sponsored by the author. VOID WHERE PROHIBITED BY LAW
a Rafflecopter giveaway
at September 20, 2018

Under the Bayou Moon by Valerie Fraser Luesse

Restless with the familiarity of her Alabama home, Ellie Fields accepts a teaching job in a tiny Louisiana town deep in bayou country. Th... 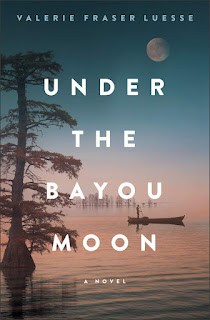