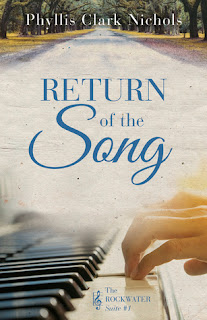 When Caroline lost her love, she lost the music too.

Caroline Carlyle’s hopes and dreams were crushed when her fiancé died six weeks before their wedding. For years, she wrestled with aching loss and shattered faith, struggling to find the inspiration that once came so easily. Abandoning her half-finished piano compositions, Caroline traded her old ambitions for the comfort and familiarity of life as the town’s piano teacher.

But Caroline’s life turns upside-down when a mysterious stranger enters her life, bringing courage andfresh purpose. Inspired by her new acquaintance, Caroline embarks on a quest to track down the beloved rare piano she played as a child. Her search leads her to Rockwater, the Kentucky estate of a wealthy gentleman, where Caroline finds her heart may be composing a surprising new song.
Amazon 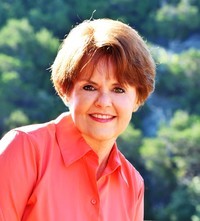 Phyllis Clark Nichols was born in the midst of a September hurricane in 1951 in the small south Georgia town of Cairo.
She grew up in this charming Southern town, studying music, reading books and graduated as the Valedictorian and President of her class. In college, Phyllis majored in English with a minor in music, graduating with highest honors from Valdosta State University. She continued her education at Southwestern Baptist Theological Seminary in Fort Worth, Texas, receiving a Masters degree in music and was named the President’s Scholar from the School of Music.
After several years of teaching English, piano and voice, Phyllis joined her husband, G. William Nichols, Ph.D., and a group to found KALEIDOSCOPE Network, Inc., a national cable television network featuring health and disability programming. From 1989 until her retirement in 2000, Phyllis served as its Chief Operating Officer. As a member of the executive team, she managed KALEIDOSCOPE’s Congressional Advisory Board and its 240-member National Advisory Board of the nation’s largest health organizations (i.e.—American Heart Association, American Lung Association, America Cancer, Juvenile Diabetes). During her years with KALEIDOSCOPE, Phyllis met many interesting people—politicians, celebrities, and leaders in the disability movement. She learned the stories of fascinating individuals with disabilities as she became their friend.
Even during her career as a businesswoman, Phyllis continued to use her creative and musical gifts. Phyllis has been a recording and concert artist appearing for state conventions, conferences, civic groups and churches. She has performed as soprano soloist in major oratorios. As a composer, Phyllis writes and arranges original songs and has written four children’s musical dramas. She has created a series of half-hour musical monologues that she delivers Victor Borge-style from the piano bench. These entertaining, humorous and philosophical monologues give Phyllis opportunity to express her faith, her joy, and her thoughts about life with her yarns and stories, with her homespun humor, and with the gentility and voice of a true Southern woman.
Phyllis spends her time now writing, serving her church, doing short-term missions, and serving on numerous boards and advisory boards.
Phyllis and her husband, Bill, make their home in Boerne, TX where they enjoy the arts, traveling, reading, writing, and spending time with interesting people. The Nichols have two married daughters and three grandchildren.

The author gives us a book that begins in tragedy and ends with hope, but we are reading the in between, and it kept me page turning.
The main character has a heart for her fellow man, and has been given the gift of making awesome music by way of her piano.
Add in a plethora of other characters that will warm your heart, and some will make you laugh, all to support a wonderful read.
There was a time in the book that I was hoping that the break in was David, but that was not to be and it opened a whole new dimension to this read.
When Caroline moves out of the studio, I would love to move in, the descriptions of this place are awesome, and the couple who own it were wonderful!

I received this book through Net Galley and the Publisher Gilead and was not required to give a positive review.