Spy of Richmond (Heroines Behind the Lines #4) by Jocelyn Green 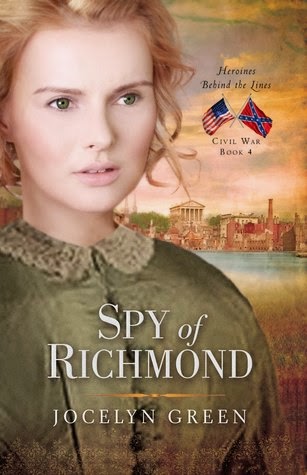 Trust None. Risk all.

Richmond, Virginia, 1863. Compelled to atone for the sins of her slaveholding father, Union loyalist Sophie Kent risks everything to help end the war from within the Confederate capital and abolish slavery forever. But she can't do it alone.

Former slave Bella Jamison sacrifices her freedom to come to Richmond, where her Union soldier husband is imprisoned, and her twin sister still lives in bondage in Sophie's home. Though it may cost them their lives, they work with Sophie to betray Rebel authorities. Harrison Caldwell, a Northern freelance journalist who escorts Bella to Richmond, infiltrates the War Department as a clerk-but is conscripted to defend the city's fortifications.

As Sophie's spy network grows, she walks a tightrope of deception, using her father's position as newspaper editor and a suitor's position in the ordnance bureau for the advantage of the Union. One misstep could land her in prison, or worse. Suspicion hounds her until she barely even trusts herself. When her espionage endangers the people she loves, she makes a life-and-death gamble.

Will she follow her convictions even though it costs her everything-and everyone-she holds dear. 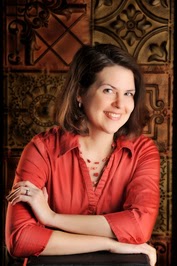 Jocelyn Green is the award-winning author of ten books, including fiction and nonfiction. A former military wife herself, she offers encouragement and hope to military wives worldwide through her Faith Deployed books and The 5 Love Languages Military Edition, which she co-authored with best-selling author Dr. Gary Chapman. Her Heroines Behind the Lines Civil War novels, inspired by real heroines on America’s home front, are marked by their historical integrity and gritty inspiration.
Jocelyn graduated from Taylor University in Upland, Indiana, with a B.A. in English, concentration in writing. She is an active member of the Christian Authors Network, the Advanced Writers and Speakers Association, American Christian Fiction Writers, and the Military Writers Society of America.
She loves Mexican food, Broadway musicals, Toblerone chocolate bars, the color red, and reading on her patio. Jocelyn lives with her husband Rob and two small children in Cedar Falls, Iowa. Visit her at www.jocelyngreen.com

﻿﻿As you open the pages of this book you are being transported to living in Richmond Virginia and landing right in the Civil War. You are about to spend some time in the infamous Libby Prison and we will learn first hand about the horrible conditions there.
We spend most of our time in the shoes of Sophia Kent and her goal to become a reporter, being a woman, almost impossible. She abhors slavery, and although a southerner, her sympathies lie with the north. Being a southern lady and a slaveholder, not by choice, she makes a life changing decision to become a spy.
We also end up as a prisoner at Libby, and are there digging the tunnel, and barely breathing with the horrible smell. We feel our building shaking and smell the fires that are burning in Richmond, and all the while wondering who will survive the chaos and insanity of this war?
Although this is a terrible time in American History, the story telling is awesome and brings the story alive. Whether we are at the slave markets or market place or sending secrets, there is danger around each corner.
There is a bit of romance, and you will wonder whom Sophie will end up with. Also the prodigal daughter returns and is she really repentant, or is she out for Susan? I for one judged her, and didn’t like her at all.
I loved this story and hated it to end, of course I wanted to the war to be gone, and to my delight there is an epilogue at the end and wonderful updates. Enjoy!

I received this book through Net Galley and the publisher Moody, and was not required to give a positive review.
at March 10, 2015