A Heart's Disguise (A Journey of the Heart, #1) by Colleen Coble 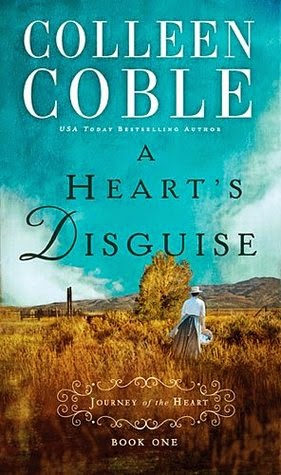 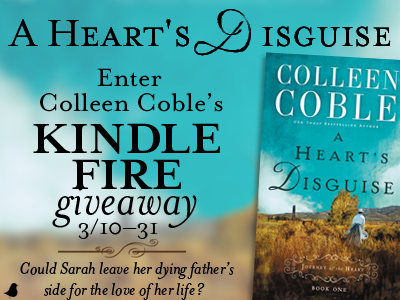 In the aftermath of the Civil War, a young woman searches for her lost love at the edge of the West.

The Civil War has destroyed Sarah Montgomery's marriage before it's even begun.

After Sarah receives word that her fiance, Rand Campbell, has been killed fighting for the Union, her brothers and ailing father persuade her to pledge herself to Ben Croftner--despite her strong misgivings. But when Sarah finds out that Rand is in fact alive--and that Ben Croftner knew it--she indignantly breaks off the engagement and goes in search of Rand.

But Ben Croftner does not take rejection lightly--and a single woman with a sick father makes an easy target. When Sarah is abducted by her treacherous fiance, Rand finally comes to her aid . . . only to reveal that he has been posted at Fort Laramie, Wyoming, and intends to take her there as his wife. But could Sarah leave her dying father's side for the love of her life? And what plans are forming in the jealous heart of Ben Croftner?

Find out more about Colleen at http://www.colleencoble.com/.

Can you imagine living though the Civil War and learning that your fiancé is dead, never to return. This is what happened to Sarah Montgomery, and she may never get over her loss. Life must go on, and her father is not about to live much longer, she lives with her brother and his wife, and they all want her to marry a well to do survivor of the horrible war.
Ben Croftner appears to be a man that gets what he wants and no one had better to get in his way. This is the man her family wants her to marry, and why not she is not happy and life has been so hard since she lost her Rand.
Can you imagine the surprise when Rand reappears and is shocked to find out that Sarah has not waited for him? He thought she loved him, as he still loves her, but now she is engaged to marry Ben? He knows that Ben knew he was alive, so how could this be possible. He had even sent a letter with Ben to give to Sarah. Um, I bet you can guess that Ben is not a very nice man, and he goes on to prove it again, and again, the deeper we get into the book.
With the end of this page-turning book we are left up in the air, and I need to know what is going to happen. Rand is on his way to report to Fort Laramie, and he is alone.
Thank goodness there is more to come, and I can hardly wait for answers. Thank you Colleen Coble, I love this story!

I received this book through Litfuse Publicity Book Tours, and was not required to give a positive review.
at March 25, 2015