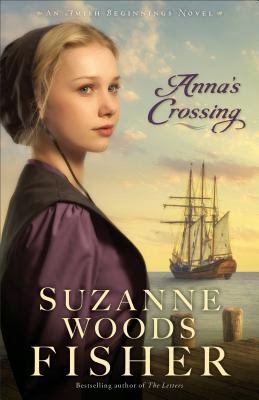 When Anna Konig first meets Bairn, the Scottish ship carpenter of the "Charming Nancy," their encounter is anything but pleasant. Anna is on the ship only to ensure the safe arrival of her loved ones to the New World. Hardened by years of living at sea, Bairn resents toting these naive farmers--dubbed "Peculiars" by deckhands--across the ocean. As delays, storms, illness, and diminishing provisions afflict crew and passengers alike, Bairn finds himself drawn to Anna's serene nature. For her part, Anna can't seem to stay below deck and far away from the aloof ship's carpenter, despite warnings.
When an act of sacrifice leaves Anna in a perilous situation, Bairn discovers he may not have left his faith as firmly in the past as he thought. But has the revelation come too late?
Amish fiction favorite Suzanne Woods Fisher brings her fans back to the beginning of Amish life in America with this fascinating glimpse into the first ocean crossing as seen through the eyes of a devout young woman and an irreverent man. Blending the worlds of Amish and historical fiction, Fisher is sure to delight her longtime fans even as she attracts new ones with her superb and always surprise-filled writing.

Suzanne Woods Fisher is the bestselling author of the Inn at Eagle Hill series, Lancaster County Secrets series, and the Stoney Ridge Seasons series, as well as nonfiction books about the Amish, including "Amish Peace." She is also the coauthor of an Amish children's series, The Adventures of Lily Lapp. Her interest in the Anabaptist cultures can be directly traced to her grandfather, who was raised in the Old Order German Baptist Brethren Church in Franklin County, Pennsylvania. Suzanne is a Carol Award winner and a Christy Award finalist. She is a columnist for Christian Post and Cooking & Such magazines. She lives in California.

For more information, please visit suzannewoodsfisher.com and connect with her on Twitter @suzannewfisher.

With Anna’s Crossing we are starting at the beginning of Amish in America. We see a glimpse at how they live in Europe before they take the long dangerous trip to freedom of religion, and yet we see that even coming here isn’t always a guarantee.
We meet Anna, as she gets ready for her reluctant journey, she has been asked to come because she speaks English. As she leaves, she thinks about returning, and we wonder if she will be able to. We also meet the Bauer family prior to leaving and their recent heartache, and we follow their youngest Felix on his adventures on board the Charming Nancy.
According to the ships carpenter, which leads him to be the ships surgeon, they are known as the Peculiars. Bairn has his own story to tell, and as you might guess becomes attracted to Anna, which can never be. He is also kind to Felix, and seems to take the young boy under his wing.
Loved at the end of this book the author tells that there is a lot of truth in this story. There was a ship named the Charming Nancy, and if it was like the one in the story, and I’m sure it was, it is a wonder anyone touched the Pennsylvania shores.
Enjoyed the tenacity of these people, they lived their faith, and from them all of the Amish/Mennonite communities got their start. I cannot personally imagine leaving all that I knew and travel on an unknown journey to a place I’ve never been, and yet what did they leave behind? Nothing!
I highly recommend this read for all people, especially those who love reading Amish stories. This is the beginning!

I received this book through Revell’s Book Bloggers Tour, and was not required to give a positive review.