Last One Home by Debbie Macomber 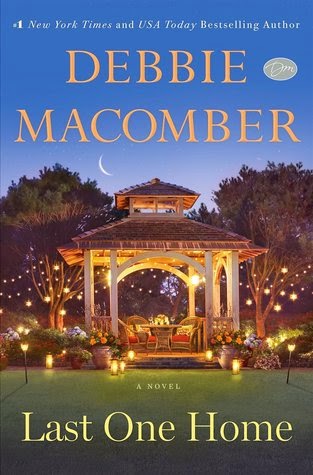 In Last One Home, three sisters who couldn’t be more different try to repair old wounds—and discover that, through all the ups and downs of life, they remain family and can depend one another.

Debbie Macomber is a #1 New York Times bestselling author and one of today’s most popular writers with more than 170 million copies of her books in print worldwide. In her novels, Macomber brings to life compelling relationships that embrace family and enduring friendships, uplifting her readers with stories of connection and hope. Macomber's novels have spent over 750 weeks on the New York Times bestseller list. Eight of these novels hit the number one spot.
In 2015, Macomber's all-new hardcover publications will include Last One Home (March), Silver Linings (August) and Dashing Through The Snow (October) and paperback editions of Blossom Street Brides (March) and her Christmas novel, Mr. Miracle (October).
In addition to fiction Macomber has also published two bestselling cookbooks; numerous inspirational and nonfiction works; and two acclaimed children’s books.
Macomber's beloved and bestselling Cedar Cove Series became Hallmark Channel’s first dramatic scripted television series, Debbie Macomber's Cedar Cove, which was ranked as the top program on cable when it debuted in summer 2013. Hallmark is now filming a second season of Debbie Macomber's Cedar Cove which will premiere this July 19.  In addition, Macomber’s upcoming Christmas novel, Mr. Miracle, will be made into an original movie premiering on Hallmark Channel in fall 2014. Previously, Hallmark Channel has produced three successful Christmas movies based on Macomber's bestselling Christmas novels, Mrs. Miracle, Call Me Mrs. Miracle and Trading Christmas.
Macomber owns her own tea room, Victorian Rose Tea Room & yarn store, A Good Yarn, named after the shop featured in her popular Blossom Street novels. She and her husband, Wayne, serve on the Guideposts National Advisory Cabinet, and she is World Vision’s international spokesperson for their Knit for Kids charity initiative.
A devoted grandmother, Debbie and her husband Wayne live in Port Orchard, Washington (the town on which her Cedar Cove novels are based) and winter in Florida.


Last One Home deals with the tough subject of spousal abuse, at its worse. A young woman falls in love with the wrong man, defies her family and runs away and gets married. Only she really has married the wrong man, one who takes all contact of her family from her, allows her no friends, and beats her for everything that goes wrong.
Cassie made really bad choices as she graduated high school and is waiting to enter college in the fall. That never happens, and she is at risk of loosing her life, in more ways than one. When the story opens she is now back from Florida and living in Seattle Washington, working and counseling woman who are in the same abusive relationships that she has finally escaped. She is trying to make a loving home for her twelve-year-old daughter Aimee, and just found out that Homes for Humanity are going to help her.
She meets Steven as she first goes to volunteer and he seems to take an instant dislike of her. We later learn that he is still grieving the death of his wife, and of course Cassie, has so many hurts.
One good thing she receives a letter from her sister, and a door opens to maybe healing a family? Can Cassie ever open her heart and forgive everyone, and maybe have her own family again? Is it possible for a person who has been so beaten down, and felt so worthless, and responsible for everything that has ever gone wrong, to really begin anew? Come along and enjoy Cassie’s rather roller coaster life, and root her on, and find her smiling again.
Another great book from Debbie Macomber. Enjoy!

I received this book through Edelweiss and the Publisher Ballantine Books, and was not required to give a positive review.