Pump Up Your Book is pleased to bring you Tom Kempinski’s I Want Your Body, Candy Starr Book Blast February 17 – 28!

ABOUT I WANT YOUR BODY, CANDY STARR 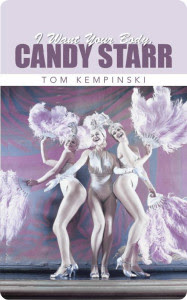 Title: I Want Your Body, Candy Starr
Genre: Humor
Author: Tom Kempinski
Publisher: iUniverse
Pages: 170
Language: English
Format: Ebook
Joe Andretti is a hospital porter living in New York, an eager member of the fan club of movie superstar, Candy Starr. One fine day, the way these things go in life, he suddenly snaps during a particularly boring session of the fan club and decides that instead of messing around looking at Candy’s movies and assessing her artistic qualities, he is going to drop everything and fly to Hollywood, and get to know Candy in the biblical sense.
However and alas, Life thwarts him at every turn. Each moment that he takes a step towards meeting his heart’s desire, little things and big things get in his way. He finds he owes his landlord money, and so must work weeks and hours of overtime to pay off the debt. And so it goes on. However much he plans and prepares, he seems glued into a world without Candy. Does he make it in the end and attain eternal happiness? Well does he?

TOM KEMPINSKI was an actor, then a playwright for 33 years, during which he had 40 plays produced, 4 in the West End of London, 1 at the National Theatre of G.B., won and was nominated for Best Play Awards, had plays produced in 40 countries.


Pump Up Your Book and Tom are teaming up to give you a chance to win a $25 Amazon Gift Card!

a Rafflecopter giveaway
at February 28, 2014