Pump Up Your Book is pleased to bring you Nick Gass’ Cataclysm Book Blast February 17 – 28! 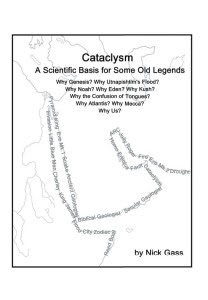 Title: Cataclysm
Genre: History
Author: Nick Gass
Publisher: iUniverse
Pages: 172
Language: English
Format: Ebook
In Cataclysm, author Nick Gass takes geology out of the oil patch to authenticate the first twenty-five verses of the Bible. He presents a multidisciplinary exploration, implementing scientific reasoning, to explain some of the ancient history of The Middle East.
Gass discusses how the rise of science has provided a platform for interpreting ancient legends. In Cataclysm, he casts a different light on a number of historical events and considers a variety of topics:
Moses and the first twenty-five verses of Genesis
The ways in which the climate may have provided the stimulus
A different view on the migration out of Africa
The why and how of the Flood
The Garden of Eden as the first Jewish Diaspora
A Second Flood
The Land of Kush
Exploring the Bible and other ancient texts, Cataclysm provides a refreshing look at some of the world’s past events and places them in a new multidisciplinary perspective.

Nick Gass earned a master’s degree in geology; he is a retired teacher with career stops as a fisherman, RCAF pilot, and geological consultant. After retirement, he found time to live in British Columbia and Mexico. Gass now resides in Calgary, Alberta, and has four daughters.


Pump Up Your Book and Nick are teaming up to give you a chance to win a $25 Amazon Gift Card!