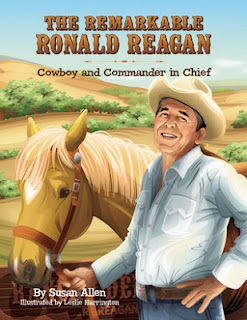 About The Remarkable Ronald Reagan

• Age Range: 5 – 8 years
• Hardcover: 36 pages
• Publisher: Regnery Kids (June 18, 2013)
Ronald Reagan was a natural leader, well-remembered not just for his political leadership, but also for his warmth, kindness, dignity, and optimism. There’s a lot kids can learn from Reagan, about our country and about being good leaders and good people. The Remarkable Ronald Reagan: Cowboy and Commander in Chief is a fun, colorful look at his life, from his humble beginnings as the son of a shoe salesman, to his years as a Hollywood actor, his service in WWII, his life as a rancher, and finally the culmination of his political career in the Oval Office. Ronald Reagan is an ideal role model, not only as a leader and former president, but also as a shining example of self-sacrifice and determination. The Remarkable Ronald Reagan is a treat for the entire family. 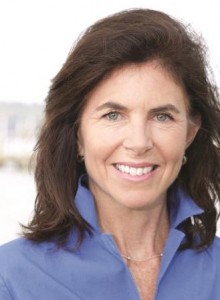 Susan Allen served as First Lady of Virginia when her husband, George Allen, was elected as the Commonwealth’s 67thGovernor. In that role, she worked on many initiatives including tourism, breast cancer awareness, and children’s issues.
Accompanying her father-in-law, famed NFL head coach and Chairman of The President’s Council on Physical Fitness, Susan met Ronald Reagan in 1987 in the Oval Office. Reagan was an Allen family friend and the one who inspired her husband to run for office. George led Young Virginians for Reagan in 1976 and currently serves on the Board for Governors for the Reagan Ranch.
Susan Allen resides in Mt. Vernon, VA, with her husband and is an avid fan of reading, history, and the outdoors. The Allens have two daughters, Tyler and Brooke, and one son, Forrest.

I gathered our 6 and 8 year old boys, and they sat and listened and asked questions as we read this book. Think the beautiful illustrations at first drew them in. Both boys are active in sports and were delighted to know that a President played football, just like them.
Both had heard of President Reagan, but didn't know much about him. Now they live on a farm, but they were amazed that the President lived on a Ranch. Wow...and even rode horses. When they listened to all that this man had accomplished in his life time, they decided that maybe they would like to become President someday...they liked the looks of that big White House!
When we went through the highlights in the back of the book they wanted to know how close he lived to where their Aunt lives in Illinois. We looked it up on the map and it wasn't to far.
They were surprised that the President had been shot while in office, and were so glad he lived. We talked about some bad men that want to take away what is good.
This is a great educational book for Children, it kept their attention right to the end, and made for some interesting side research. I highly recommend this as a keeper.