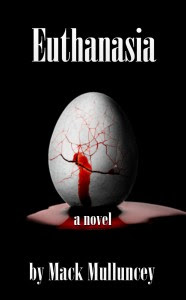 When Alex left the clinic that day, she thought she could move on from the rape that left her pregnant and the agonizing decision to have an abortion. That is, until the child she thought she left behind contacts her. Terrorized by mysterious phone calls and guilt, Alex feels her sanity slipping away as she becomes convinced that she must find the man who brutalized her to make a family for her dead daughter.

Anti-abortion crusader Tobin Bartell wouldn’t have it any other way. As The Leader of The Movement, when he’s not organizing protests or giving speeches, he’s orchestrating a campaign of harassment against women like Alex…and plotting to kill the local abortion doctor.

And Tobin has no shortage of candidates for the job: Paige wants money, Courtney wants love, Derek wants to belong. Tobin just wants it done…and it doesn’t matter to him who does it.

Life. Death. Murder. It’s all the same to them.


ABOUT AUTHOR MACK MULLUNCEY Mack Mulluncey considered writing a traditional bio, then she remembered no one really cares. You can visit her at:

Tobin to me is one sick individual, and has a really high self-importance. Makes me think of the protestors at soldiers funerals. This books deals with the dark subject of abortion. Tobin is the head of the movement, and acts like a god, but is actually one sick individual.
I became really upset with the way he treated the woman who had the abortions...and most of the young workers realize really soon what he is about and quit.
This book deals with some very tough dark subjects, adultery, incest, rape, and abortion. Making it hard for me to read. It is really not the type of book I usually read. It did read very, very fast, and did show the heart ache that some of these poor woman felt after undergoing this procedure.
I have never [as of yet] been on the picket lines at these places, but some of my family have. They surely didn't act the way these people did. They would just pray for them and hoped for the right decision.

I received this book through Pump Your Book Publicity Tours, and was not required to give a positive review.