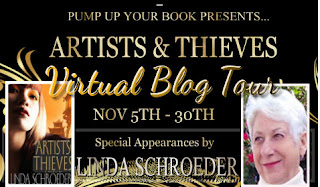 It doesn’t matter if we write literary fiction, science fiction, fantasy, mystery, or horror, there comes a time, probably at the beginning of the book and ever after, when we have to provide a setting for our characters.
I set Artists & Thieves in and around Monterey, California, because I lived there and know its basic geography and the neighborhoods of Carmel, Pacific Grove, and Pebble Beach.
But choosing a place for a scene is not just about geography. I like to create settings which reflect character as well as provide a place for them to be. There are two supporting characters in Artists & Thieves who work with art in markedly different ways. I show some of this difference by placing them in very different homes. One of these characters is the artist Angelo. He is a close friend of the heroine, Mai Ling, and he helps her steal the Chinese bronze bowl. He is flashy, always in motion, and always notices colors. He lives in a loft on Fisherman’s Wharf. I made up the loft but put it on the real Fisherman’s Wharf because there is constant activity on the wharf and hundreds of colors:
“[Angelo] pressed his feet on the wooden floor of his upstairs, one room studio. . . .He checked out the crowd on the long stretch of Fisherman’s Wharf below. Straw hats moved onto the excursion boat, red sweatshirts lined up for ice cream, black camera bags dangled on shoulders. A few boats with white sails skimmed out of the marina. The water gleamed electric blue.”
Angelo’s opposite is James Chang, an art crime attorney. He is wealthy, highly educated, and protects art but does not create it. I created a home for him that is totally different from Angelo’s. It is in Pebble Beach:
“They walked along the cobblestone path to the open front door, roughhewn, weathered oak boars bound together by black metal. . . .The house was build in 1920 by a devotee of Frank Lloyd Wright and it hovered on the steeply terraced hillside, a single story of horizontal wooden beams and vertical supports of stone. . . . The interior walls of the house were stark white. Not one painting, tapestry, or object hung on them. Instead, the room was dominated by the fireplace, a sculpture of brink and granite, red and gray chunks of uneven thicknesses which were interrupted midway to the ceiling by a polished red oak mantel.”
As readers, we sometimes skim the descriptive settings. Don’t. Settings are important. They not only provide a frame for actions but clues to characters.
And they let writers make up places. 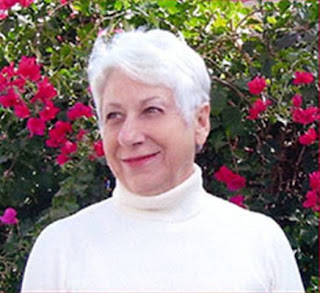 Linda Schroeder divides her time between the bright sun of California and the high mountains of Colorado. She has a Master’s degree in English and one in Communicative Disorders/Audiology. In addition to her novel, Artists & Thieves, she has published a college text.
Her early interest in English expanded to include language disorders and she began a second career as an audiologist and aural rehabilitation therapist working with deaf and hard-of-hearing children and adults.
Currently, she studies and practices Chinese brush painting, celebrating the vitality and energy of nature. She follows art and art theft blogs and writes her own blog about art and sometimes includes reviews of novels. She is working on two more novels, a second Mai Ling novel about the Diamond Sutra, and a Sammy Chan art mystery about the forgery of a Goya painting.
You can visit her website at www.artistsandthieves.com 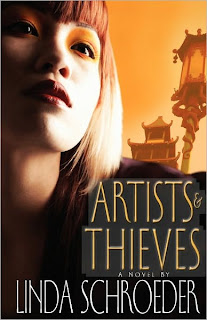 Winner of the 2011 San Diego Book Awards, Action/Suspense category
Where there is art, there are thieves.
Mai Ling is both. Artist by day, thief by night, she recovers stolen art for Interpol. It’s a business, not a passion, until her beloved grandfather reveals a family secret that is also a destiny. He is duty-bound to return to China an especially precious bowl which belonged to his ancestor. Mai must steal it for him.
But Mai Ling is not the only one after the bowl. Four others plan to extract the bowl from a private California art collection. The rival thieves grasp and then lose the bowl until finally Mai is faced with the ultimate dilemma: save the bowl or save herself. Her duty to her grandfather gives her only one choice.
Set against the vibrant backdrop of the Monterey Peninsula and peopled with quirky characters, this stylish art caper entertains on every page.