Pump Your Book Virtual Tours Presents: A Texan's Choice (The Heart of a Hero, #3) by Shelley Gray 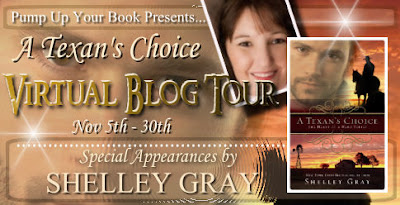 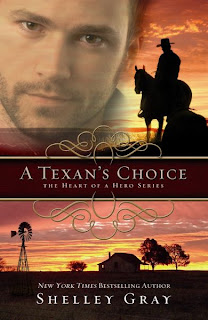 ABOUT A TEXAN’S CHOICE

When notorious outlaw Scout Proffitt wins a rundown ranch in west Texas, he expects to find the home he’s never had. Instead, he finds a run-down shack, a barn in dire straits…and a lovely woman who’s in no hurry to give up her ranch.

When Scout discovers that Rosemarie has nowhere else to go, he reluctantly allows her to stay with him for two weeks until she can find another home. But soon the locals get involved and insist they marry.

Determined to do at least one thing right in his life, he marries Rose. Then people from his past come back and give him an offer he can’t refuse. If things go well, he can make a fresh start. If not, he’ll be even worse off than before.

Which was something he never thought possible… 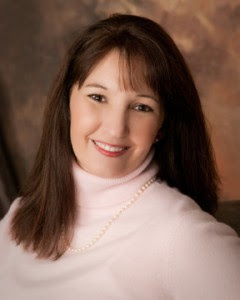 Shelley Gray’s first Amish novel, Hidden, was nominated for the Inspirational Readers Choice award. Her book Simple Gifts won the Reviewers Choice Award. Shelley’s novel, The Protector, recently made the New York Times bestseller list. Her novels have won the prestigious HOLT Medallion Award, the Reviewers Choice Award, and been highlighted in the Philadelphia Enquirer, Time Magazine, and USA Today. She’s also been interviewed on NPR as well as numerous regional radio stations. In addition, her novels have made both the USA Today and New York Times Bestsellers lists.

Before writing romances, Shelley lived in Texas and Colorado, where she taught school and earned both her bachelor’s degree in English literature and elementary education and later obtained her master’s degrees in educational administration. She now lives in southern Ohio and writes full time.

Her latest book is the Christian historical fiction, A Texan’s Choice.

This is the third book in the Heart of a Hero Series, and I would recommend you read all of these books, but you can read this one without. Enough information is provided to allow you to know what is going on.
We start this book in 1874 West Texas, and if you think you have had a bad day, Rosemarie Cousin's would probably win. She has just lost her Father, and her Mother and Sister have left her. Then a man shows up to claim he owns her home and ranch....Scout Proffitt won the property in a card game from her Father. You will feel sorry for Rosemarie right from the beginning. When she was eight and her brother was four, he drowned while she was watching him. Her family has blamed her ever after. Some family!
Scout Proffitt has lived his life as a gunslinger and has been on the run. When out of the blue an offer appears, he will not be able to turn down. We follow along as other characters we have learned to love a reintroduced, and we wonder if all will survive, or will we say goodbye?
What happens between Rosemarie and Scout is sweet, and although unexpected, we hope for Rosemarie. Ah, she deserves to be happy, but can she find it with a gunslinger? We find that a lot of these people need to find forgiveness, and the Lord surely leads them. Enjoy this great read...you won't be able to leave this one alone once you start.

I received this book from Pump Your Book Virtual Tours, and the Publisher Abingdon Press, and was not required to give a positive review.