On My Honor (Heroines of WWII) by Patty Smith Hall 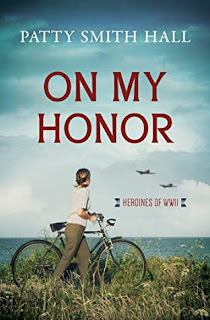 Full of intrigue, adventure, and romance, this new series celebrates the unsung heroes—the heroines of WWII.

Ginny Mathis had no intention of staying rooted in the Outer Banks—then war broke out. While working as a clerk for Oregon Inlet ferry, naval officers ask her to be watchful for German U-boats reportedly spotted in the area. To help occupy her younger sister, Ginny enlists the Girl Scout troop she leads to help watch for suspicious activity. Soon the girls are sneaking around, hiding a shipwreck survivor. Ginny must take charge, but is this man the enemy, or does he hold secrets that could turn the tide of the Battle of the Atlantic in the allies’ favor? Patty Smith Hall is a multi-published author with Love Inspired Historical and Barbour Publishing. Married to her hero of 33+years, Danny, and the mother of two extraordinary women, she calls North Georgia her home.

I really enjoyed this book, from beginning to end it kept my attention, and also the author's notes!

We have Girl Scouts, ships exploding off the coast of North Carolina, and a young woman who has been studying to become a nurse. Love that girl what a big heart Ginny has as she gives of herself for her family and her country!

This is a page turner, unknown, or rumored happening off the coast, and according the notes at the end, people lost their lives to the enemy, and people were kept in the dark.

We are offered sweet young girls who go about helping wild life, and human life, and a woman who gives it all for her family and country! We are also offered a bit of young romance, and I would love to have followed on with their lives, but this book is fiction, but will open your eyes! We were at war before we knew it on our own soil!

I received this book through Net Galley and the Publisher Barbour, and was not required to give a positive review.
at November 15, 2022