A famous actress, a protective bodyguard, a festive Christmas season, and a killer…or two…on the loose.

Everybody believes movie star Denise Masters abandoned her family to pursue her dream, but the truth is much more complex. For years, she’s longed to return to Coventry to repair her relationship with her daughter, but contractual obligations–and fear of being rejected–have kept her away. When a serial killer targets Hollywood actors, Denise decides to spend the Christmas holidays in New Hampshire. She will finally face the disgrace of her past.

Private security agent Jon Donley figures the woman he’s been hired to guard will turn out to be a paranoid, privileged prima donna. Instead, the more he gets to know Denise, the more he likes her. But he’s not being paid to get involved with her. His job is to keep her safe while he figures out what links her to the other victims.

But the serial killer on the west coast isn’t the only danger they face. A second one is closing in fast, threatening not just Denise but the little girl she’ll stop at nothing to protect.

Romance, suspense, and a New England Christmas. Don’t miss the next installment of the addictive Coventry Saga.

Robin Patchen is a USA Today bestselling and award-winning author of Christian romantic suspense. She grew up in a small town in New Hampshire, the setting of her Nutfield Saga books, and then headed to Boston to earn a journalism degree. Working in marketing and public relations, she discovered how much she loathed the nine-to-five ball and chain. After relocating to the Southwest, she started writing her first novel while she homeschooled her three children. The novel was dreadful, but her passion for storytelling didn’t wane. Thankfully, as her children grew, so did her writing ability. Now that her kids are adults, she has more time to play with the lives of fictional heroes and heroines, wreaking havoc and working magic to give her characters happy endings. When she’s not writing, she’s editing or reading, proving that most of her life revolves around the twenty-six letters of the alphabet. Visit https://robinpatchen.com/subscribe to receive a free book and stay informed about Robin’s latest projects.

On Becoming a Hero…

I’ve been contemplating this story since I wrote the first book in the Coventry Saga, Glimmer in the Darkness, and discovered that little Ella’s mother had abandoned her family. She was such a bad mother, in fact, that she didn’t even come home when Ella was kidnapped.

Or so I thought.

But Denise has been whispering in my ear for a couple of years now, telling me her secrets. Turns out, she doesn’t just play a hero in the movies. She’s learning to be a hero in real life. In Denise’s case, that means facing the ghosts of her past, ghosts that chased her away from home, from the people she loved most in the world.

To outsiders, it looks like Denise has everything a person could want—fame, money, and success. But all she really wants is a relationship with the daughter she adores, the daughter she left because she couldn’t see another way.

Have you ever been there, so deep in the muck that you can’t find your way out? So lost that you think the best option—the only option—is to escape? Have you ever believed that your problems—whether caused by someone else or by your own choices—were unsolvable?

And then she met Jesus, and He changed everything. He pulled her out of the mire and set her on solid ground. He gave her the longing and the courage to face the people she’d disappointed.

The serial killer preying on Hollywood actresses is the impetus she needs to return to Coventry just as the community ramps up for the Christmas season.

But Denise’s attempt at escaping one killer puts her squarely in the path of another.

This story won’t be much fun for Denise, though I have a strong suspicion she’s going to really like the hunky bodyguard, Jon Donley. (If you read Lineage in Corruption, you might remember Jon.)

For us who get to read it, it’s going to be great fun. I hope you’ll check it out!

For Him and My Family, October 22

Because I said so — and other adventures in Parenting, October 31

Spoken from the Heart, November 3 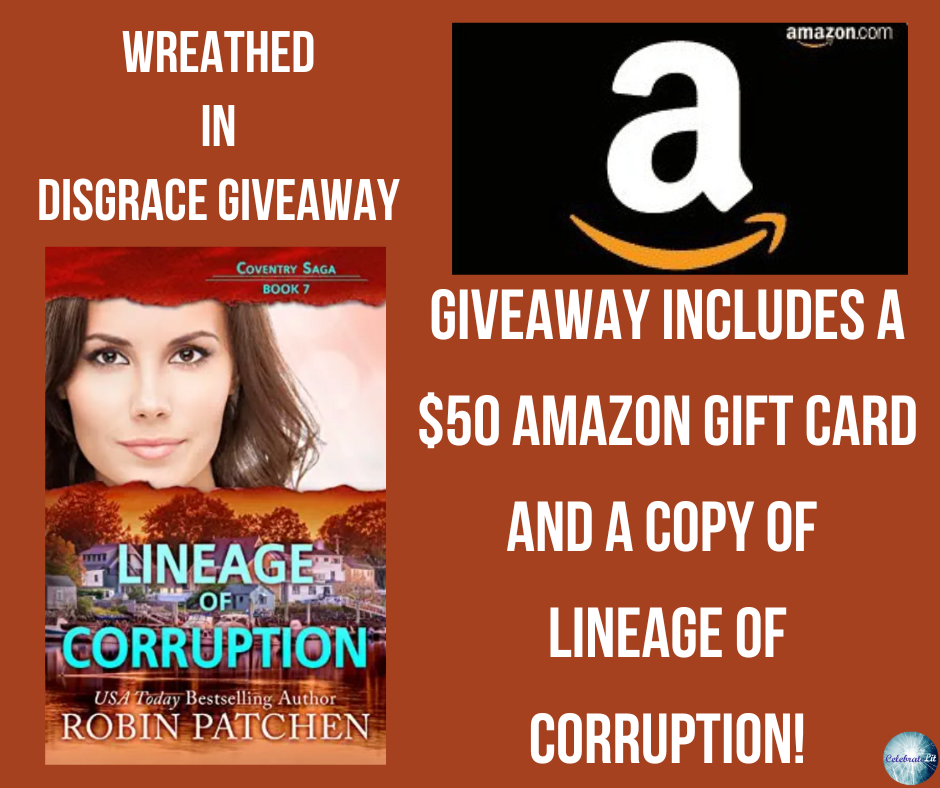 To celebrate her tour, Robin is giving away the grand prize package of a $50 gift card and a copy of Lineage of Corruption!!