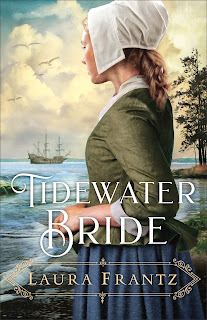 Selah Hopewell seems to be the only woman in the Virginia colony who has no wish to wed. True, there are too many men and far too few women in James Towne. But Selah already has her hands full assisting her father in the family's shop. And now she is in charge of an incoming ship of tobacco brides who must be looked after as they sort through their many suitors.

Xander Renick is perhaps the most eligible tobacco lord in the settlement. His lands are vast, his crops are prized, and his position as a mediator between the colonists and the powerful Powhatan nation surrounding them makes him indispensable. But Xander is already wedded to his business and still grieves the loss of his wife, daughter of the Powhatan chief.

Can two fiercely independent people find happiness and fulfillment on their own? Or will they discover that what they've been missing in life has been right in front of them all along?

Bestselling and award-winning author Laura Frantz takes you to the salty shores of seventeenth-century Virginia in this exploration of pride, honor, and the restorative power of true love.

Laura Frantz is passionate about all things historical, particularly the 18th-century, and writes her manuscripts in longhand first. Her stories often incorporate Scottish themes that reflect her family heritage. She is a direct descendant of George Hume, Wedderburn Castle, Berwickshire, Scotland, who was exiled to the American colonies for his role in the Jacobite Rebellion of 1715, settled in Virginia, and is credited with teaching George Washington surveying in the years 1748-1750. Frantz lives and writes in a log cabin in the heart of Kentucky.According to Publishers Weekly, "Frantz has done her historical homework." With her signature attention to historical detail and emotional depth, she is represented by Janet Kobobel Grant, Literary Agent & Founder, Books & Such Literary Agency of Santa Rosa, California.Readers can find Laura Frantz at www.laurafrantz.net.

I like this author, and this book doesn’t disappoint, and loved the historical aspect.  This is how our country began with these brave souls.
Our country at this time belonged to England, people their put up money for the settlements, and in return they earned on their investment, in the form of crops. We are with the people that are sending the crops back to the mother country, namely her tobacco. Thus we have farmers requiring brides paying with tobacco.
How we get from the beginning of this book to the end will keep you page turning. There is some sweet romance, kidnapping, and perhaps murder. We see this all pulled together, and when the story concludes I actually wanted more!

I received this book through Net Galley and the Publisher Revell, and was not required to give a positive review.