The Titanic Sisters by Patricia Falvey 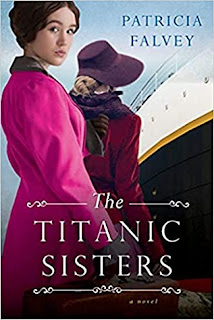 From the acclaimed author of The Girls of Ennismore comes a captivating and extraordinary tale of perseverance and bravery. This touching saga of sisterhood—perfect for fans of Fiona Davis and Marie Benedict—follows two young Irish women yearning for independence and adventure, as they set sail on RMS Titanic—the “ship of dreams”—only to be faced with the tragedy of that fabled maiden voyage…

Delia Sweeney has always been unlike her older sister—fair and delicate compared to tall, statuesque Nora, whose hair is as dark as Donegal turf. In other ways too, the sisters are leagues apart. Nora is her mother’s darling, favored at every turn, and expected to marry into wealth. Delia, constantly slighted, finds a measure of happiness helping her da on the farm. The rest of the time, she reads about far-off places that seem sure to remain a fantasy. Until the day a letter arrives from America . . .

A distant relative has provided the means for Delia and Nora to go to New York. Delia will be a lowly maid in a modest household, while Nora will be governess for a well-to-do family. In Queenstown, Cork, they board the Titanic, a majestic new ocean liner making its maiden voyage. Any hope Delia carried that she and her sister might become closer during the trip soon vanishes. For there are far greater perils to contend with as the ship makes its way across the Atlantic . . .

In the wake of that fateful journey, Delia makes an impulsive choice—and takes Nora’s place as governess. Her decision sparks an adventure that leads her from Fifth Avenue to Dallas, Texas, where oilfields bring unimagined riches to some, despair to others. Delia grows close to her vulnerable young charge, and to the girl’s father. But her deception will have repercussions impossible to foresee, even as it brings happiness within reach for the first time 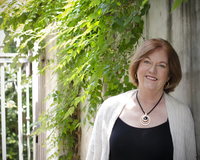 Patricia Falvey is an Irish-born writer living in Dallas, Texas. She is the author of the critically acclaimed The Yellow House, and The Linen Queen. Both are historical novels set in Northern Ireland. Her upcoming novel, The Girls of Ennismore, set in the west of Ireland and focusing on the Easter Uprising of 1916, will be published in the U.S. in March, 2017, and is currently available for pre-order. The U.K. version of the e-book will be available at the end of September, 2016.

Patricia immigrated alone to the U.S. at the age of 20 and forged a long and successful career in the financial services industry, rising to a Managing Director for a major consulting firm where she oversaw a national tax practice. However, she never lost sight of her dream of becoming a published author and in 2008 walked away from her old career to give her dream a chance. In 2010 her courage was rewarded with the publication of The Yellow House. She views this phase of her life as her “Second Act” and strongly encourages anyone with a dream to pursue it no matter what their age. It’s never too late!

When not traveling around the scenic backroads of her beloved Ireland doing research and visiting friends and family, Patricia likes hanging out with good friends in Texas and enjoying the “craic” - which loosely translated from the Gaelic means lively conversation, storytelling, laughter and good times. She also enjoys teaching and mentoring fledgling writers, speaking to book clubs, watching PBS British television programs, and attending the theater.
For more on Patricia and her books, visit her website at : www.patriciafalveybooks.com

This book wouldn’t let me go, once I turned the first page I couldn’t put it down!
We all know what happened to the Titanic, but now we are meeting two of the passengers, and we see their life before they leave Ireland, and then what happens to them on this maiden voyage.
Sisters, Nora and Delia, one loved by their mother, and the other despised by her. Thank goodness for their Da, he was the blessing in their lives.
We switch back and forth as we are updated on their lives, and how their circumstances change, and how they end up surviving.
What a great story the author has woven out of the tragedy these young woman experience, and yet how different a path they are put on than what was originally planned!
I loved the women that befriend these survivors, strong woman who give love and friendship, especially Mrs. Shaw and Mayflower!
You don’t want to miss this one!
I received this book through Net Galley and the Publisher Kensington, and was not required to give a positive review.
at January 26, 2021