About Grand Openings Can Be Murder

Grand Openings Can Be Murder (Bean to Bar Mysteries)

Felicity Koerber has had a rough year. She’s moving back to Galveston Island and opening a bean to bar chocolate factory, fulfilling a dream she and her late husband, Kevin, had shared. Craft chocolate means a chance to travel the world, meeting with farmers and bringing back beans she can turn into little blocks of happiness, right close to home and family.

She thinks trouble has walked into her carefully re-built world when puddle-jump pilot Logan Hanlon shows up at her grand opening to order custom chocolates. Then one of her employees drops dead at the party, and Felicity’s one-who-got-away ex-boyfriend – who’s now a cop – thinks Felicity is a suspect. As the murder victim’s life becomes more and more of a mystery, Felicity realizes that if she’s going to clear her name in time to save her business, she might need Logan’s help. Though she’s not sure if she’s ready to let anyone into her life – even if it is to protect her from being the killer’s next victim. For Felicity, Galveston is all about history, and a love-hate relationship with the ocean, which keeps threatening to deliver another hurricane – right into the middle of her investigation. Can she figure it out before all the clues get washed away?

Amber Royer writes the CHOCOVERSE comic telenovela-style foodie-inspired space opera series, and the BEAN TO BAR MYSTERIES. She is also the author of STORY LIKE A JOURNALIST: A WORKBOOK FOR NOVELISTS, which boils down her writing knowledge into an actionable plan involving over 100 worksheets to build a comprehensive story plan for your novel. She blogs about creative writing techniques and all things chocolate at www.amberroyer.com. She also teaches creative writing for both UT Arlington Continuing Education and Writing Workshops Dallas. If you are very nice to her, she might make you cupcakes.

If you’ve met me for five minutes, you probably know I’m really into coffee.  I have an espresso machine at my house, and the first thing I do when I travel (pre COVID, and hopefully again someday soon!) is to check out the local coffee scene.  I love watching people roast coffee, and I collect unusual coffee cups and mugs.  But let’s take a moment to talk about something more basic.  Drip coffee.  More specifically, Community brand drip coffee, made in Baton Rouge Louisiana.

The Community website says it is a, “A Rich, Smooth & Bold Flavor!”  And it lives up to the hype.  Merely smelling the stuff brewing is enough to bring me back to my childhood.  Half of my extended family is from Louisiana, and when everyone was over to visit, all the adults would sit around the table drinking coffee.  Being able to drink it meant being grown up.  But it was – to my childhood mind – bitter, terrible stuff.  So my grandmother would give me a cup of hot milk with a few splashes of coffee in it, so that I could sit with everyone else and “drink coffee.”  It is easy for me, in my mind, to equate Community Coffee with kindness and consideration.  So easy, that when we drove past the Community Coffee sign in Lake Charles, I stopped to take a picture.

So when I started the first chapter of Grand Openings Can Be Murder, I wanted to give a similar memory to my protagonist, to highlight that she also has roots in Louisiana and Southeast Texas.  But it seemed too on the nose to start with her drinking coffee.  In the book, Felicity is a craft chocolate maker.  And to me, there’s a burned element to the fragrance of strongly brewed chickory coffee.  So I have her burn a test batch of cacao beans – which sparks the memory.  And I have Felicity’s aunt be the one to bring up the similarity of the smell, and the connotation it gives to times when the whole family was together.  Felicity has drawn away from her family, because of grief that makes her feel that isolating herself is better than letting them see her sad.  So this is important to the story.  (Don’t worry – there’s also lots of humor and hints of romance as Felicity interacts with others to solve the titular murder.)

This whole aspect to her arc keys into a psychological phenomenon that writers often use to great effect in stories: involuntary autobiographical memory (referred to in the literature as IABs).  While German psychologist Hermann Ebbinghaus was the first to study this concept, the name involuntary memory was first coined by a writer, not a psychologist.  In his vast multivolume novel In Search of Lost Time, French novelist Marcel Proust included a scene in which the (semi-autobiographical) narrator eats a madeleine.  This hardly seems like ground-breaking literature – or psychology – but note the connotation he gives it: “As soon as I recognized the taste of the piece of madeleine soaked in her decoction of lime-blossom which my aunt used to give me . . .”

By stating that the narrator recognized this particular taste, Proust gives the reader a tangible reason to jump back through time, as the narrator remembers childhood events surrounding this taste.  The phenomenon works in real life – we’ve all experienced it, whether from a smell, a taste, a song – so we believe it will work for a fictional character too.

This allows the writer to make a quick leap into backstory – like I did in the first chapter of my book – without it feeling unnatural.  It also allows the character to have revelations.  Proust’s character had completely repressed these memories of childhood, and so the memories come flooding back.  Alternately, you can have a revelation where a character has been trying to figure something out, and has assembled most of the pieces of the puzzle, but is still missing something – right up until the involuntary autobiographical memory clues into something the character has smelled/heard earlier in the story to bring on the kind of blinding revelation that makes everything fall into place.

Writers can also attach these kind of memories to people.  My character is a chocolate maker, so tastes are as important to her as smells.  At one point, I have her make a truffle with tastes that she associates with two different characters, which in the context of the scene highlights how conflicted she is about how she feels about both guys – especially when someone calls her on it, asking her why the ganache she’s made reminds them of one of the character’s cologne.

These are all simple ways that writers let readers in on what the characters are thinking, so that you can follow the viewpoint character’s logic and feel for her as she struggles through situations.

I think that’s one reason why readers get so excited when I tell them I’ve written a book about chocolate.  Most people seem to have some kind of positive association with chocolate.  I just asked my husband what he thinks of when smelling chocolate.  (I made him smell milk chocolate.)  He immediately said:

--The chocolate sweetdough pie his grandma used to make for special occasions.

-- Pulling Oreos apart with his dad, when they could just talk.

-- How his grandparents used to keep a jar of M&Ms for when he and his siblings came to visit.

When the sample was dark chocolate, his response changed:

--Being at the Dallas Chocolate Festival.

--That time we were in Samaná Dominican Republic watching a farmer crush cacao beans in a giant mortar and pestle.

Go to your kitchen and taste or sniff some cocoa powder, Baker’s chocolate, single origin bars – whatever you have on hand.  What associations/involuntary memories does chocolate bring up for you? 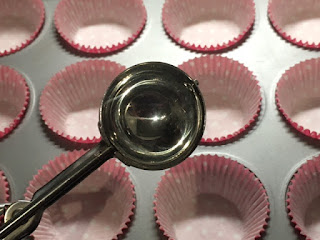 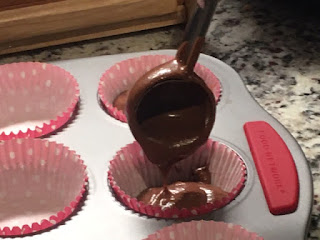 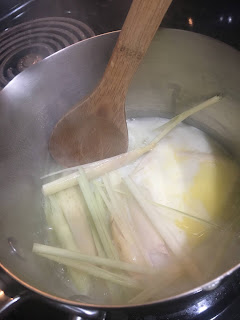 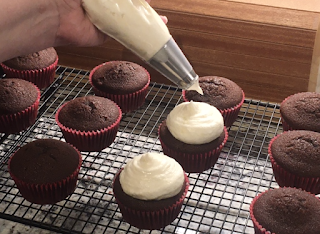 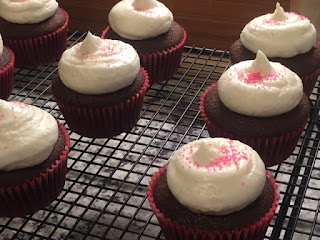 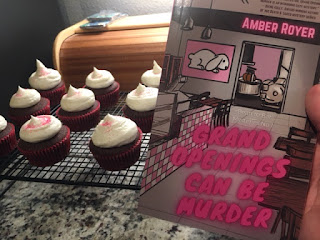 The frosting for these cupcakes combines cinnamon whiskey with lemongrass-infused butter.  The cinnamon hits you first – and then the lemon comes in as a back note.  Lemongrass is too gritty/abrasive to mince into a baked good, and you don’t want to add too much liquid to a frosting, so do take the time to infuse the butter and cool it back to solid.  For a non-alcoholic version, add two tsp. of cinnamon to the frosting, and add milk to make up the missing liquid.

Combine the cocoa powder and the hot coffee in a medium bowl.  Stir to dissolve.  Set aside and allow to cool to room temperature.

In a large bowl, whisk together flour, baking powder, cinnamon and salt.

In the bowl of a stand mixer, cream the butter and sugar, then add the eggs and vanilla.  Mix well.  Add the flour mixture and mix just until combined.  Stir in the chocolate mixture and mix to a uniform color.

Scoop 2 Tbsp. of batter into each paper cup.  Bake 15-18 minutes.  Allow to cool completely, then frost with Lemongrass Buttercream Frosting.

Measure the lemongrass butter, and add enough shortening to total one cup.

In the bowl of a stand mixer, cream the butter. Gradually add sugar, one cup at a time, beating well on medium speed. Scrape sides and bottom of bowl frequently. Add the cinnamon whiskey and beat at medium speed until light and fluffy. Keep bowl covered with a damp cloth until ready to use.

Cut each stalk lengthwise in half, and cut into 2-inch pieces.  Place the butter in a saucepan pan, and add the lemongrass pieces.  Over high heat, melt the butter.  When butter is melted, turn heat to low and stir often until flavors are blended, 15 to 20 minutes. Strain the butter into a bowl.  Add the lemon zest.  With a slotted spoon, lift out and discard lemon grass. Let cool, cover, and chill until solid.

January 20 – I’m All About Books – SPOTLIGHT

January 20 – My Journey Back – CHARACTER INTERVIEW

January 23 – I Read What You Write – CHARACTER GUEST POST

January 29 – Escape With Dollycas Into A Good Book – AUTHOR INTERVIEW

Have you signed up to be a Tour Host?