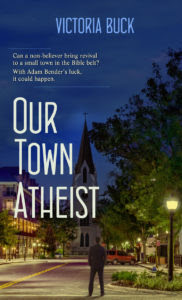 Small-town banker Adam Bender tackles a robber and loses. But that’s not what shakes the foundations of his well-managed life. He awakens in the hospital to the vision of an angel. But that’s not what casts doubt on his reasonable judgment. Turns out the angel is only a beautiful doctor—someone Adam wants to get to know better.

The bank robber is on the loose and out to get Adam. News spreads in the gossipy little town of Adam’s misfortune, his love interest, and his…atheism? He’d thought he could keep that a secret. But Adam Bender can handle it. Or, can he?

What happens one night on a mountain road leaves him questioning his worldview. And his sanity. And soon the whole town is waiting to find out if what Adam saw will alter his unbelief.

Victoria Buck is a native Floridian running a small business with her husband, who teaches her everything she needs to know about both melodrama and comic relief. Wake the Dead is her debut novel. Killswitch is the follow-up to book one. Transfusion is the last book in the trilogy about the world’s first transhuman.

Now, on to other stories! Victoria is currently working on two present-day novels. No transhumans or insurrections. Of course, there has to be a bit of a weird twist! 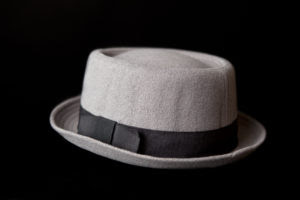 Have you ever heard of a porkpie hat? Maurice is wearing one that terrible night when Adam sees him. The Chief of Police hasn’t seen a porkpie in Crossroads for decades, but old Mrs. Jones can tell you all about it. I wasn’t familiar with the hat until I wrote this story. Now I have one of my own!

I admit unusual characters pop into my head. Not your typical protagonist for someone who writes from a Christian worldview, Adam Bender showed up in my imagination after I wrote some blog posts about atheism. Those posts drew more response than I expected from the atheist community. Some were not so kind, but others wanted only to exchange ideas and explain their views in a non-confrontational manner. That’s when this easy-going, fictitious atheist began speaking to the writer in me. I let him talk for a while, and then I had to tell his story.

Because I said so — and other adventures in Parenting, January 15

For Him and My Family, January 21

To celebrate her tour, Victoria is giving away the grand prize package of an eBook copy of the book and a porkpie hat!!