The Amish Newcomer by Patrice Lewis 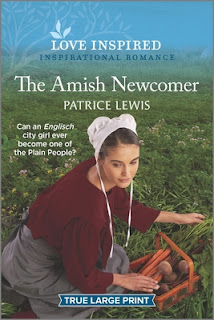 Can a modern city girl ever become one of the Plain People?
She needed a safe place to hide. Instead, she found a place to call home.
Television journalist Leah Porte never imagined her career would end with her witnessing a murder. Now she’s temporarily living among the Amish in witness protection. Instead of feeling alone and adrift, Leah is warmly welcomed by the close-knit community—and Amish bachelor Isaac Sommer. But caught between two very different worlds, choosing love would mean leaving her big city life behind forever.