Something Worth Doing by Jane Kirkpatrick 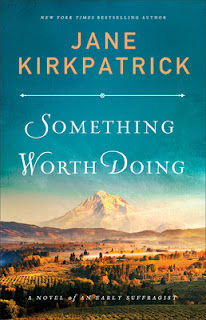 In 1853, Abigail Scott was a 19-year-old school teacher in Oregon Territory when she married Ben Duniway. Marriage meant giving up on teaching, but Abigail always believed she was meant to be more than a good wife and mother. When financial mistakes and an injury force Ben to stop working, Abigail becomes the primary breadwinner for her growing family. What she sees as a working woman appalls her, and she devotes her life to fighting for the rights of women, including their right to vote.

Following Abigail as she bears six children, runs a millinery and a private school, helps on the farm, writes novels, gives speeches, and eventually runs a newspaper supporting women's suffrage, Something Worth Doing explores issues that will resonate strongly with modern women: the pull between career and family, finding one's place in the public sphere, and dealing with frustrations and prejudices women encounter when they compete in male-dominated spaces. Based on a true story of a pioneer for women's rights from award-winning author Jane Kirkpatrick will inspire you to believe that some things are worth doing--even when the cost is great.

The wisdom of a mother that is passed down to a daughter that in the end, benefits all of the woman of this country. We need to be grateful for the sacrifices woman like Abigail Scott, and other's who fought throughout their lives for woman's rights, including the right to vote.
We follow Abigail from her first year of teaching until the end of her life, through life's tribulations of joy and sorrow.
God put a wonderful man named Ben in her path, and we journey with them as they survive in the newly established Oregon, through the birth of their children, and with Abigail and her activism, with their extended family and friends.
A book of history, in a way, but also the backbone of what makes this country so special.
You will be page turning, and we know the outcome, but how the war was fought  we are along for the ride.

I received this book through LibraryThing and the Publisher Revell. and was not required to give a positive review.