Running out of Time (A Dodie O’Dell Mystery)

Restaurant manager Dodie O’Dell’s themed food ideas have been called cute, clever, and delicious, but never revolutionary—until now. Dodie’s Windjammer Restaurant is stocking the Etonville Little Theatre’s concession stand with colonial-era desserts and drinks: Swamp Yankee applesauce cake, pumpkin bread, hot cider punch, and mulled wine to complement the latest production. A local playwright has adapted Thornton Wilder’s Our Town into Eton Town, shifting the story to colonial America and the founding of Etonville, New Jersey, shortly after the Revolutionary War.
On opening night, hours before the curtain rises, Dodie runs into an agitated actress backstage with blood on her hands. Then a stranger is found among the chairs set for a graveyard scene with a knife in his chest. The show will not go on—the theatre is now a crime scene. Hoping to clear the red-handed suspect, Dodie returns to the role of amateur sleuth to mull over the clues and beat the backstage stabber to the punch—before someone else becomes history . . .

Suzanne Trauth is a novelist, playwright, screenwriter, and a former university theatre professor. She is a member of Mystery Writers of America, Sisters in Crime, and the Dramatists Guild. When she is not writing, Suzanne coaches actors and serves as a celebrant performing wedding ceremonies. She lives in Woodland Park, New Jersey. Readers can visit her website at www.suzannetrauth.com.
Facebook

Have you signed up to be a Tour Host?
Click Here Find Details and Sign Up Today! 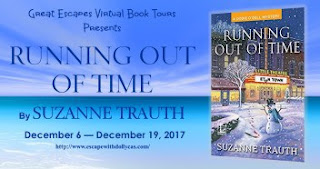