Just Ella by Annette K. Larsen
Ariella was only looking for a distraction, something to break up the monotony of palace life. What she found was a young man willing to overlook her title and show her a new and vibrant way of life. But when her growing feelings for Gavin spiral out of control and clash with the expectations of her station, she will discover that the consequences of her curiosity are far more severe than she’d imagined.
“I watched in helpless horror as two guards hauled Gavin to his feet and dragged him from the room. My voice was frozen, unable to protest as another guard took hold of my arm, leading me upstairs. From the confines of my room, I stared into the darkness beyond my window, hoping to catch one more glimpse of Gavin. He was gone, and I wondered if he would have been better off if he had never met me.”

#1
He gave me a sad smile and shrugged. “I apologize if my bluntness offends you. I figured you would leave if you were upset by me.”
“That would be very rude of me.”
“It’s what I’d expect.”
“Why? Because that’s what a noble would do?”
“Well.” The confusion was back, forcing him to make a slight concession. “Any other noble.” It was somewhat gratifying that he no longer felt compelled to lump me with the nobles he despised. However, the fact remained—I wasn’t a noble. And I knew he would think even less of me when he knew what I was.
I wouldn’t lie. “I told you, I’m not—”
“Come now, Ella. Your tree climbing hasn’t got me fooled.” He used an almost paternal tone, his eyes laughing. “You are nobility, aren’t you?”
I buried my hurt. “No, I’m something worse.”
“Oh, come now, I don’t think that badly of people. The only thing that might be worse is royalty.” How charming he was, even when insulting me.
I stood silent for a moment, wondering if he would catch on. When he continued to gaze at me, I simply said, “Exactly.”
A look of horror crossed his face and I gave him a sad smile before turning to leave.
“Oh,” I heard him stuttering behind me, sounding utterly mortified. “No, I…my apologies, miss—Your Highness,” he corrected himself sharply. “Princess, I’m so very sorry, I…”
I shook my head as I turned to face him again. He looked so different: the confidence, the grin, the amusement were all gone, replaced with a look akin to physical pain. “It’s all right,” I said quietly. “You’re not wrong.” I should have inclined my head, waiting for him to bow before I left. Instead I lifted my hand in farewell.
#2
I wanted to have a friendship with this young man, and in order to do so, I knew I had to be honest. “Because of who I am, it’s often difficult to judge a person’s sincerity.” He didn’t say anything, so I went on. “I’ve heard countless flattering words in my life, about anything and everything I do. I never know who to believe.” I tried to look at him, but couldn’t. “It makes friendships difficult; friendship requires sincerity, not flattery.” I glanced up and saw that his expression appeared a bit bewildered, like he had seen something for the first time—something confusing.
“I can understand that,” was his eventual response.
I let out a breath I hadn’t realized I’d been holding. I never shared confidences with anyone.
He walked closer, which surprised me in and of itself, and sat down next to me. I was speechless, and relieved when he started a conversation.
“So,” he said, turning toward me, “tell me the most absurd thing someone has said to you in order to flatter their way into your good graces.”
A smile broke over my face as comments began flying through my head, from the most blundering to the most eloquent compliments. “Oh,” I sighed in amusement, “I don’t know that I could pick just one.”
“So, tell me more than one.”
That was the beginning for us. It was tentative and shaky, but I came back the next day and the day after. We continued to talk and I continued to explore.
#3
He laughed along with me, then became serious. “Might I ask you something?”
“Of course.” I found it curious that he would ask. I thought we had moved beyond that.
He hesitated for just a breath before asking, “What would happen if someone found us here together?”
My shoulders tensed, but I willed myself to maintain my composure. “What do you mean?”
He narrowed his eyes. “You know what I mean. How much trouble would I be in?”
My gaze fell to my fidgeting hands. “You wouldn’t.”
“I wouldn’t?”
“My mother would know it was my idea. I wouldn’t let the blame fall to you.” He seemed puzzled by my response. “I’m the one intruding,” I clarified. “You’re only doing your job.”
“You’re not intruding.”
I smiled. “I have to go.” I stooped to pick up my slippers and walked away from him. “Meet me here tomorrow morning.”
“Is that an order?” he asked lightly.
“No,” I said over my shoulder before lifting the hem of my skirts and hurrying gingerly along the winding stone path. Just before I slipped out of sight, I glanced back to see him looking mystified.

Author Annette K. Larsen
I was born in Utah, but migrated to Arizona, Missouri, and Virginia before settling in Idaho.
Though I dabbled in writing throughout school, being an author seemed like an unattainable dream. It took me seven years to write my first book, Just Ella. During that time, I taught myself how to write a novel. Not the most time effective method, but it gave me an education I wouldn’t have received from a class or a how-to book. Something about the struggle of writing without a formula or rules worked for me.
I write clean romance because I love it. Jane Eyre is the hero of my youth and taught me that clinging to your convictions will be hard, but will bring you more genuine happiness than giving in ever can.
I love chocolate, Into the Woods, ocean waves, my husband, and my five littles. And I love books that leave me with a sigh of contentment. 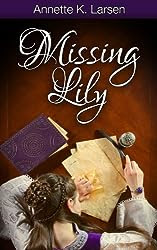 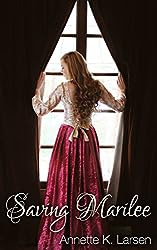 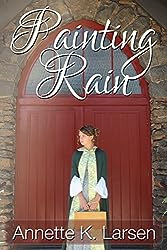 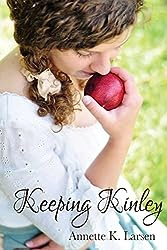 Keeping Kinley is on Sale for just 99 cents!

$25 Amazon Gift Card or Paypal Cash Giveaway
Ends 12/28/17
Open only to those who can legally enter, receive and use an Amazon.com Gift Code or Paypal Cash. Winning Entry will be verified prior to prize being awarded. No purchase necessary. You must be 18 or older to enter or have your parent enter for you. The winner will be chosen by rafflecopter and announced here as well as emailed and will have 48 hours to respond or a new winner will be chosen. This giveaway is in no way associated with Facebook, Twitter, Rafflecopter or any other entity unless otherwise specified. The number of eligible entries received determines the odds of winning. Giveaway was organized by Kathy from I Am A Reader and sponsored by the author. VOID WHERE PROHIBITED BY LAW.

a Rafflecopter giveaway
at December 14, 2017