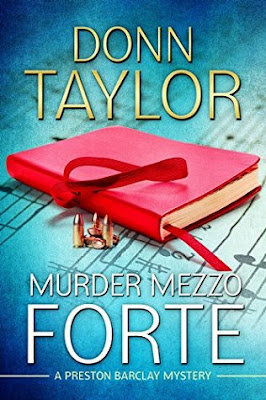 He is a reclusive history professor with musical hallucinations, she a headstrong professor of religion, a converted Wiccan. Earlier, they solved a campus murder, but now police say they formed two-thirds of an illicit love triangle with a newly-murdered female colleague and they're probably guilty of her murder. A leak of the alleged scandal to the college administration threatens their jobs. Their desperate attempt to prove themselves innocent of the triangle and the murder plunges them into a tangle of unsavory corporate relationships among college trustees. And it puts their lives in danger from a mysterious criminal organization that seems to have tentacles everywhere.

Can this ill-matched pair's stumbling efforts succeed against the entrenched forces of the police, the college's incompetent administration, and that powerful but unseen criminal organization? If not, they may end up unemployed, in prison, or suffering a fate much worse .

Donn Taylor led an Infantry rifle platoon in the Korean War, served with Army aviation in Vietnam, and worked with air reconnaissance in Europe and Asia. Afterwards, he earned a PhD in Renaissance literature and taught literature at two liberal arts colleges. His publications include three suspense novels, one historical novel, and a book of poetry. He lives near Houston, TX, where he writes fiction, poetry, and essays on current topics.

We are back with Professor Preston Barclay and his accomplice Mara Thorn, and they are back in the wrong place at the right time, or something like that, as they do find bodies, and they are not alive.
This time the go to meet another member of the faculty at Overton College, make that University, and discover Professor Mitra Fortier’s body. Now what, and as you probably know these two know to get as far as they can from the deceased and any hint that they are involved. There are shady police around, and one has a particular dislike of Pres dating back to their military service time.
What is going on, and who is following them, and when you can’t trust the police, whom can you turn to. This page-turner will answers your questions, and the reasons why the murder has happened.
If you enjoy mysteries, this one will not disappoint. Enjoy!
I received this book through Litfuse Publicity Book Tours, and was not required to give a positive review.