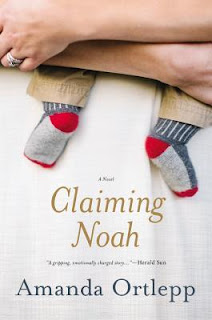 This riveting debut novel of psychological suspense explores the dilemmas that arise when motherhood and science collide.

Catriona Sinclair has always had a well-developed sense of independence--in fact the one sore point in her otherwise happy marriage is her husband James's desire to take care of her. As she's often tried to explain to him, she took care of herself before she met him, and did a good job of it. But James has been especially attentive lately as they struggle to have a baby. They succeed at last through in vitro fertilization, but unwilling to risk the heartbreak of another miscarriage, they decide to make their "spare" frozen embryo available to another family.

Diana and Liam Simmons are desperate for a child. Unable to conceive, they are overjoyed to learn that as the closest genetic match to the Sinclairs they are the recipients of the embryo donation. Diana's only concern is her mother's disapproval of IVF, but any doubts raised are quickly eclipsed by Diana's joy of being pregnant.

As Diana is finding delight in every aspect of motherhood, Catriona keeps waiting for the rush of adoration she knows she is supposed to feel, but instead slips into a deep depression. Just as Catriona begins to find her way back to normalcy, one of the babies is kidnapped. Suddenly, all of their lives begin to unravel and intertwine, and none of them will ever be the same.

Amanda Ortlepp is a Sydney-based writer, born in Adelaide in 1981. As a child she was a voracious reader with ambitions of one day becoming an author. Instead she completed a Bachelor of Commerce degree after high school, followed by a Masters of Applied Finance, and spent a decade working in marketing and communication roles. It was only after she turned thirty that she revisited her love of fiction and started writing at nights and on weekends while working full-time.
In 2015 her debut novel, Claiming Noah, was published in Australia and New Zealand and became a bestseller. Its ethical dilemmas and emotionally-charged themes struck a chord with mothers and book clubs in particular. Claiming Noah will be available in the US and Canada from July 2016.
Amanda’s second novel, Running Against the Tide, is a story about long-held prejudices and fractured relationships, set on the remote Eyre Peninsula in South Australia. It was published in Australia and New Zealand in March 2016.

Claiming Noah is a story that is going to linger with you for a long time, and it seemed so real. A couple that wanted a baby so badly they try IVF, and then suffer the heartbreak of a miscarriage, not once but twice.
The story has a lot of heartbreak, and some you will never see coming, a gasp, oh no! We have infidelity, attempted infanticide, severe postpartum depression, kidnapping, betrayal, prision, I could go on, you will be page turning, and questioning.
The author has done a wonderful job with this story, I never realize that left over embryos could be adopted, but it really makes sense. Makes a person think, right down to the end and the lawsuit, what would you do? Heartbreak seems to happen to all, and yet there seems to be a lot of love and forgiveness going all the way around.
I loved this story, and wish I could be more like some of the characters here, there are solutions here, and you are going to love the epilogue.
I received this book through Faithworks and was not required to give a positive review.
at July 05, 2016