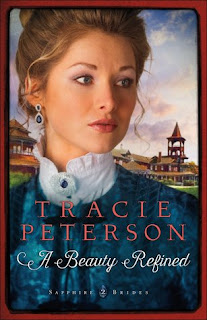 Phoebe Von Bergen is excited to accompany her father when he travels from Germany to purchase sapphires in Montana. Little does she know that her father's plans--for the gemstones and his daughter--are not what they seem.
Ian Harper, a lapidary working in Helena, finds the young woman staying at the Broadwater Hotel more than a little intriguing. Yet the more he gets to know her, the more he realizes that her family story is based on a lie--a lie she has no knowledge of. And Ian believes he knows the only path that will lead her to freedom.

Meeting Ian has changed everything. Phoebe is determined to stay in America, regardless of her father's plans. But she may not be prepared for the unexpected danger as the deception begins to unravel. 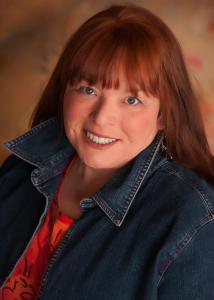 Tracie Peterson is an award-winning, best-selling author of over 100 books. Having given her heart to Jesus at the young age of six, Tracie has always felt called to some form of ministry, and writing fulfills that mission field.
Tracie received her first book contract in November, 1992 and saw A Place To Belong published in February 1993 with Barbour Publishings’ Heartsong Presents. She wrote exclusively with Heartsong for the next two years, receiving their readership’s vote for Favorite Author of the Year for three years in a row.
In December, 1995 she signed a contract with Bethany House Publishers. Tracie now writes exclusively for Bethany House Publishers. She has co-written with a variety of authors including Judith Pella, Judith Miller, James Scott Bell, Kimberley Woodhouse and her daughter Jennifer.
Throughout her writing career Tracie has found time to speak at writer’s conferences where she has a special heart for new authors. She is often joined by her husband Jim, whose background in history offers new authors insight into research. Besides teaching at conferences, Tracie also at one time managed Barbour Publishing’s Heartsong Presents book line – overseeing the production of 52 books a year. Tracie teaches at women’s conferences around the country and shares her testimony and insight for Christian living through the eyes of an author passionately in love with her Heavenly Father.
Tracie was awarded the Romantic Times Career Achievement Award for 2007 Inspirational Fiction and the 2011 Lifetime Achievement Award from American Christian Fiction Writers. Her books have won numerous awards for favorite books in a variety of contests, including USA “Best Books 2011” Awards, best Religious Fiction for Embers of Love!
Making her home in Montana, this Kansas native enjoys spending time with family–especially her three grandchildren–Rainy, Fox and Max..
For information on having Tracie speak at your event – contact Noelle Buss at Bethany Publishers/Baker Books.

Phoebe Von Bergen, is following her father, the German Count, on a world tour looking for sapphires. They are now in Helena, Montana, and while her father is on a buying trip, she stays at the hotel and while on a walk literally runs into her dead mother.
Obviously all that she knew was a lie perpetrated by her father, and what she learns will change the course of her life. She has always done everything her father asked and he has spoiled her, but she is compliant for him, until…well you need to read this book.
I had the feeling that the Frederick was the personification of pure Evil, and everyone around him had better take care. He really doesn’t have a conscience and only loves one person, himself.
Don’t let this story get away, it reads like your in the room with them, and you want to do something about what is happening, even to unlocking the door.
I received this book through Bethany House Blogger Program, and was not required to give a positive review.