Pump Up Your Book is pleased to bring you Monica Shipley’s Mothers with Broken Hearts book blast June 2-13! 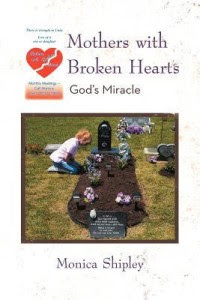 Death is a part of life, but for a mother who has suffered the death of a child, life can suddenly become unbearable. She finds herself completely shattered—knocked to her knees and unable to get up. Her pain is horrible, beyond anything she has ever felt or experienced before. In Mothers with Broken Hearts, author Monica Shipley tells the heartrending story of the suicide of her son, Jeffrey, and the unexpected miracle that occurs as he is dying.
She shares the emotional free fall that his family experienced as he lay motionless for five days following his suicide attempt. She recounts the story of her life as she lives with the shadow of Jeffrey’s drug addiction. She talks honestly about his suicide, God’s miracle, and what she has done since his death to help hundred of mothers who have also lost a child.
By sharing her story and reaching out to mothers experiencing the greatest loss imaginable, Shipley hopes to bring some measure of comfort to each of them.

At sixteen, Monica Shipley married her high school sweetheart, Aaron, who was seventeen at the time. Forty-seven years later, they are still going strong. They had four sons—Aaron Jr., Bryan, Jimmy, and Jeffrey. Jeffrey committed suicide at age thirty-three. Monica and Aaron currently live in Indiana.