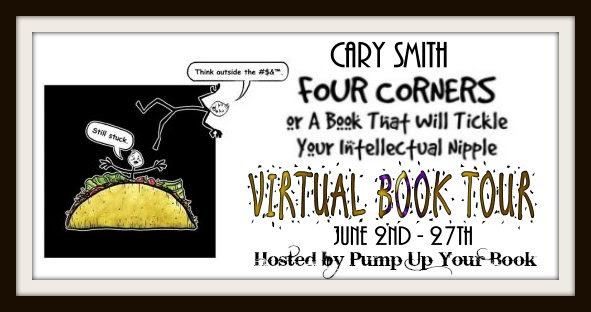 Pump Up Your Book is pleased to bring you Cary Smith’s Four Corners Or a Book That Will Tickle Your Intellectual Nipple virtual book tour June 2 – 27! 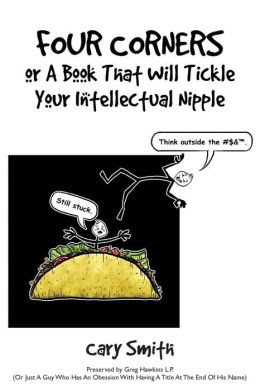 Title: Four Corners, Or a Book That Will Tickle Your Intellectual Nipple
Author: Cary Smith
Publisher: Shakespeare’s Fool
Pages: 255
Genre: Fiction
Format: Paperback/Kindle
High school. Those two words, for some, instill fear and loathing and vivid memories of sadistic teachers, bullies, and bad lunches. For some happy few, however, high school remains a misty paradise, where a student’s budding dreams and aspirations were nurtured by brilliant, sympathetic teachers, guidance counselors and peers.
Cary Smith, the nom de plume of Greg Hawkins, clearly falls into the first group, as he describes in his hilarious new book, FOUR CORNERS, OR A BOOK THAT WILL TICKLE YOUR INTELLECTUAL NIPPLE.  With a keen sense of the absurd, Smith thrusts his satirical sword straight at the jugular vein of all things pretentious and pedantic that haunt the halls of the educational world. Nothing is spared as Smith takes on the institution of secondary education. Readers will wince in recognition at the cast of characters Smith has created – the brains, jocks, bullies, cliques, incompetent teachers and pompous administrators – who all take a good drubbing from the flat side of Smith’s sword.
“I don’t know why I thought that when middle school was over that high school would be a brand new place, a fresh start,” Smith writes. “Maybe it was because all my teachers in middle school were implanting their lectures about how in high school the teachers wouldn’t let you get away with this and that and that it would be a very different place. Well, as usual, the teachers of the system lied to me …”
For good measure, Smith creates another archetypal character – Brad Cruise, a symbol of the pseudo-intellectual critics and pedagogues who inhabit academia. If you spotted Cruise’s name as a mash-up of Brad Pitt and Tom Cruise, that’s what the author intended.
Hawkins also points out that, while Cary Smith is the “satirical narrator” of FOUR CORNERS, “what we come to find out is that not only does he have a humorous side, he has a serious side, and he does, in fact, care, despite what he may say.”
Although much of Smith’s writing is clearly based in personal experience, Hawkins says the book is satirical fiction. The book’s style is steeped in hyperbolic language and literary hi-jinx that hark back to the 18th-century comic classic TRISTRAM SHANDY.
“I wrote FOUR CORNERS to entertain people,” Hawkins says, “not only to help people get through the turbulent time that is high school in America, but to make people feel OK about the time they spent during those years.” He adds:  “There is no one, to my knowledge, writing with this type of narrator, about this subject matter, in such a style and manner, and writing humorously. It is very hard to find a good book with a blend of the serious and comedic.” 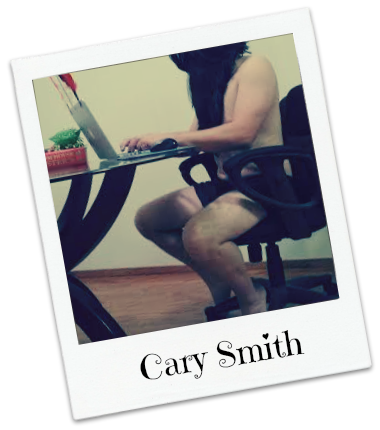 Cary Smith, the nom de plume of Greg Hawkins, lives in San Jose, CA. He became interested in books and writing because of a teacher. His favorite book is “Hocus Pocus,” by Kurt Vonnegut or “100 Years of Solitude” by Gabriel Garcia Marquez. He is currently either going to finish his collection of short stories next or turn one of his short stories into a novel, which would be a new take on the ghost genre.
His latest book is Four Corners, Or a Book That Will Tickle Your Intellectual Nipple.
Visit him on Facebook at https://www.facebook.com/tickleintellectual.
at June 26, 2014