She thinks he’s high-handed and out for her gold. He thinks she’s difficult and money-hungry. Will they discover that love is the true treasure?

Scarred in a childhood accident, Caroline Vogel has yet to find a man willing to marry her, so she heads to the Pike’s Peak goldfields to pan enough ore to become a woman of means. When she and the handsome assistant trail boss hit it off, she begins to hope her future may not be spent alone. Then she catches wind of dark secrets from the man’s past, and she’s not sure what or who to believe.

Orphaned as a teenager, Oliver Llewellyn stole to survive, then used his skills for the army during the war. Nowadays, he applies his knowledge to catch dangerous thieves for the Pinkerton Agency, so guarding a young woman during a wagon train journey should be easy. But he didn’t count on the fact she’d angered a man bent on revenge. He also didn’t count on losing his heart.

Linda Shenton Matchett writes about ordinary people who did extraordinary things in days gone by. A volunteer docent and archivist for the Wright Museum of WWII, Linda is a former trustee for her local public library. She is a native of Baltimore, Maryland and was born a stone’s throw from Fort McHenry. Linda has lived in historic places all her life, and is now located in central New Hampshire where her favorite activities include exploring historic sites and immersing herself in the imaginary worlds created by other authors.

Have you ever heard the quote about Fred Astaire and Ginger Rogers that says, “Sure he was great, but don’t forget that Ginger Rogers did everything he did, backwards…and in high heels?” Originally seen in a 1982 Frank and Ernest comic strip, the line has been used by many people from comedians to politicians.

A slight twist on the statement can be made about women in the centuries before modern attire allowed them to wear slacks…they did everything men did, but in floor-length skirts (to say nothing of when they had to wear corsets!). A few examples include cooking over an open hearth, hauling water before the invention of pumps and indoor plumbing, farm work such as milking cows or gardening, and riding a horse.

One of my favorite aspects about writing is developing the characters, especially the female protagonists. Mine are typically…well, untypical. The gals in my books are war correspondents, mechanics, spies, doctors, pilots, and midwives, just to name a few. While thinking about what to write next, I stumbled on an article about female prospectors, and I knew I had my story. The few images I found confirmed my suspicion. These women prospected alongside the men,  swirling their pans of silt hour after hour…all while wearing a dress.

I continued to dig and was delighted to find journals and diaries of these stalwart women who either followed their husbands, brothers, or fathers to the gold field or actually set out on their own. The first book in the series, Gold Rush Bride Hannah takes in northern Georgia during the rush of 1829 when more than one million dollars of gold was unearthed.

For Him and My Family, August 16 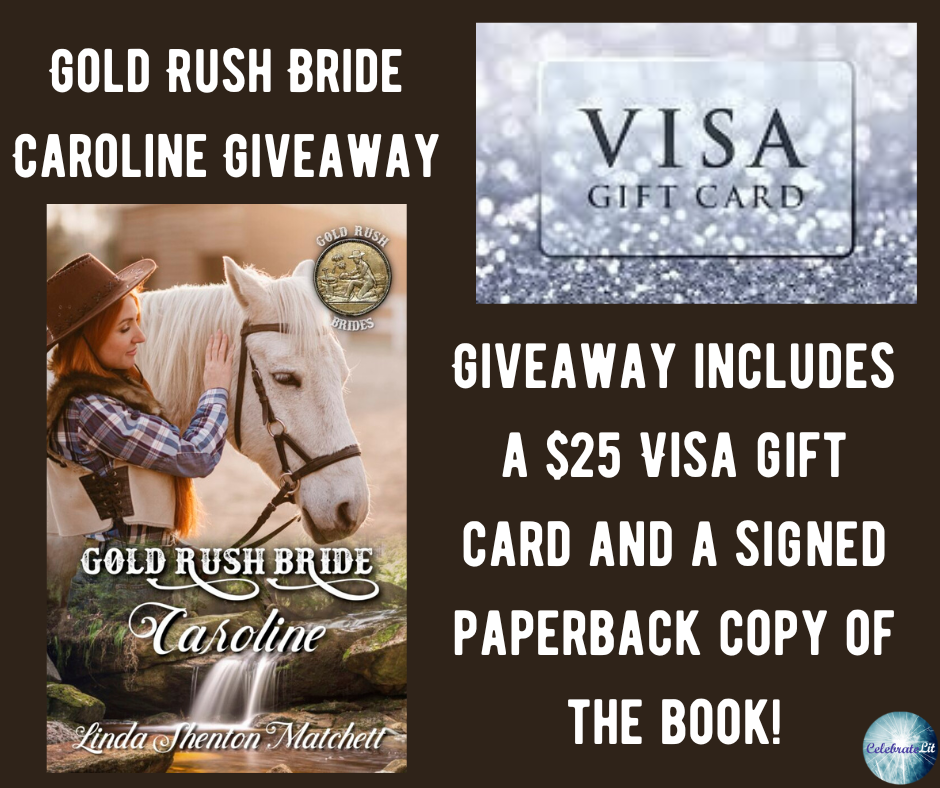 To celebrate her tour, Linda is giving away the grand prize package of a $25 Visa Gift Card and signed copy of the book!!