Beyond the Tides (Prince Edward Island Shores, #1) by Liz Johnson 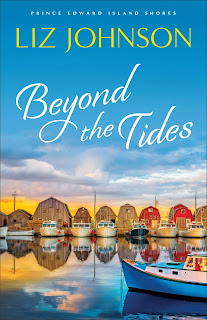 When Meg Whitaker's father decides to sell the family's lobster-fishing business to her high school nemesis, she sets out to prove she should inherit it instead. Though she's never had any interest in running the small fleet--or even getting on a boat due to her persistent seasickness--she can't stand to see Oliver Ross take over. Not when he ruined her dreams for a science scholarship and an Ivy League education ten years ago.

Oliver isn't proud of what he did back then. Angry and broken by his father walking out on his family, he lashed out at Meg--an innocent bystander. But owning a respected fishing fleet on Prince Edward Island is the opportunity of a lifetime, and he's not about to walk away just because Meg wants him to.

Meg's father has the perfect solution: Oliver and Meg must work the business together, and at the end of the season, he'll decide who gets it. Along the way, they may discover that their stories are more similar than they thought . . . and their dreams aren't what they expected.

Bestselling author Liz Johnson invites you back to Prince Edward Island for a brand-new series about family, forgiveness, and the kind of love that heals all wounds.

By day Liz Johnson works in marketing. She finds time to write late at night and is a Christy Award finalist and a two-time ACFW Carol Award finalist. Liz makes her home in Phoenix, Arizona where she enjoys theater, exploring local history, and doting on her nieces and nephews. She loves stories of true love with happy endings. Find out more about Liz at www.LizJohnsonBooks.com.

This read quickly became a page turner, and a story about lobster boats, well, actually it is much more than that.

The pain and ridicule of the sins of a father, Oliver endured this, and his acting out in his hurt affected a young girl and her science project.

Fast forward and now Meg's father wants to sell his lobster business to this guy that wrecked her future, or did he?

Now Meg is willing to do anything to get her father to give her the business, including enduring sea sickness, good thing there are now patches. We are there to see her as she takes on the job of running the boat, using her unknown muscles, and learning from her nemesis!

There are surprises revealed, so keep page turning, and enjoying, and I am excited there is another book coming!

I received this book through the Publisher Revell, and was not required to give a positive review.