All the Frequent Troubles of Our Days: The True Story of the American Woman at the Heart of the German Resistance to Hitler by Rebecca Donner 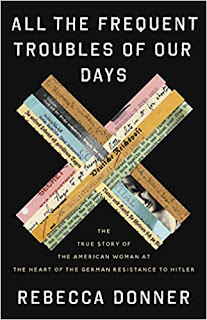 Born and raised in Milwaukee, Mildred Harnack was twenty-six when she enrolled in a PhD program in Germany and witnessed the meteoric rise of the Nazi party. In 1932, she began holding secret meetings in her apartment—a small band of political activists that by 1940 had grown into the largest underground resistance group in Berlin. She recruited working-class Germans into the resistance, helped Jews escape, plotted acts of sabotage, and collaborated in writing leaflets that denounced Hitler and called for revolution. Her coconspirators circulated through Berlin under the cover of night, slipping the leaflets into mailboxes, public restrooms, phone booths. When the first shots of the Second World War were fired, she became a spy, couriering top-secret intelligence to the Allies. On the eve of her escape to Sweden, she was ambushed by the Gestapo. At a Nazi military court, a panel of five judges sentenced her to six years at a prison camp, but Hitler overruled the decision and ordered her execution. On February 16, 1943, she was strapped to a guillotine and beheaded.

Historians identify Mildred Harnack as the only American in the leadership of the German resistance, yet her remarkable story has remained almost unknown until now.

Harnack’s great-great-niece Rebecca Donner draws on her extensive archival research in Germany, Russia, England, and the U.S. as well as newly uncovered documents in her family archive to produce this astonishing work of narrative nonfiction. Fusing elements of biography, real-life political thriller, and scholarly detective story, Donner brilliantly interweaves letters, diary entries, notes smuggled out of a Berlin prison, survivors’ testimony, and a trove of declassified intelligence documents into a powerful, epic story, reconstructing the moral courage of an enigmatic woman nearly erased by history. 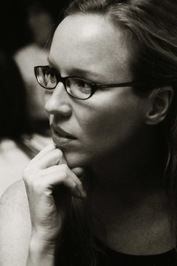 I was born in Canada and during childhood lived in a number of different places — Japan, Michigan, Virginia, and California. My love of books has remained the one constant in my life.

All the Frequent Troubles of Our Days is my third book, a fusion of biography, WWII espionage thriller, and scholarly detective story. I interweave letters, diary entries, notes smuggled out of a Berlin prison, survivors’ testimony, and a trove of declassified intelligence documents into an epic story about an American woman who was a leader in Berlin's underground resistance to Hitler.

This is a book that we know the beginning and the end, even before we turn the cover. Knowing what is going to happen to Rebecca Donner’s Great Great Aunt is terrifying, and all the while reading I kept hoping it wouldn’t happen, but this is a true story, and I can’t change the past. Ah, if one was able to change history, well, not possible.
Through the words of the author, we follow Mildred on her journeys, and her personal effort to thwart the evil that is being perpetrated on Europe.
We meet Mildred as she is leaving her teaching job in America, before she marries Arvid, and her move to Germany. She is totally unaware of the part she is about to play as the a leader in the German resistance.
This should really be required reading, walking in her shoes, would I have had the courage to do what she did? I would hope so, but I also hope I never have to make those choices.
This is a powerful read, and you will meet some well know individuals, some I was familiar with and others we get to know. These are remarkable people, who for some risked the ultimate!
I received a copy of this book from the Publisher Little, Brown and Company, and was not required to give a positive review.
at August 13, 2021