The Paris Dressmaker by Kristy Cambron 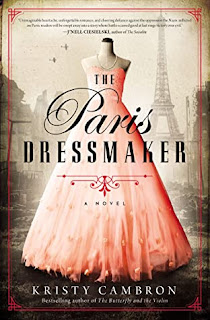 Based on true accounts of how Parisiennes resisted the Nazi occupation in World War II—from fashion houses to the city streets—comes a story of two courageous women who risked everything to fight an evil they couldn’t abide.

Paris, 1939. Maison Chanel has closed, thrusting haute couture dressmaker Lila de Laurent out of the world of high fashion as Nazi soldiers invade the streets and the City of Lights slips into darkness. Lila’s life is now a series of rations, brutal restrictions, and carefully controlled propaganda while Paris is cut off from the rest of the world. Yet in hidden corners of the city, the faithful pledge to resist. Lila is drawn to La Resistance and is soon using her skills as a dressmaker to infiltrate the Nazi elite. She takes their measurements and designs masterpieces, all while collecting secrets in the glamorous Hôtel Ritz—the heart of the Nazis’ Parisian headquarters. But when dashing René Touliard suddenly reenters her world, Lila finds her heart tangled between determination to help save his Jewish family and bolstering the fight for liberation.

Paris, 1943. Sandrine Paquet’s job is to catalog the priceless works of art bound for the Führer’s Berlin, masterpieces stolen from prominent Jewish families. But behind closed doors, she secretly forages for information from the underground resistance. Beneath her compliant façade lies a woman bent on uncovering the fate of her missing husband . . . but at what cost? As Hitler’s regime crumbles, Sandrine is drawn in deeper when she uncrates an exquisite blush Chanel gown concealing a cryptic message that may reveal the fate of a dressmaker who vanished from within the fashion elite.

Told across the span of the Nazi occupation, The Paris Dressmaker highlights the brave women who used everything in their power to resist darkness and restore light to their world. 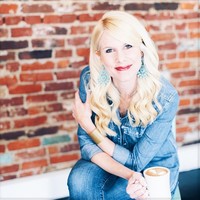 KRISTY CAMBRON is a vintage-inspired storyteller writing from the space where art, history, and faith intersect. She's a Christy Award-winning author of historical fiction, including her bestselling debut, The Butterfly and the Violin, and nonfiction, including the Verse Mapping series of Bibles and Bible studies. A self-proclaimed history nerd, she loves to chase all things research, going behind the scenes at a Ringling Bros. Sarasota mansion, touring a former TB sanitarium, making bee friends at a working honey farm, or embarking on a back-roads jaunt across Ireland being a few.

She holds a degree in Art History/Research Writing and spent 15 yrs in education and leadership development for a Fortune-100 corporation, partnering with such companies as the Disney Institute, IBM/Kenexa, and Gallup before stepping away to pursue her passion for storytelling. Her work has been named to Publishers Weekly Religion & Spirituality TOP 10, Library Journal Reviews’ Best Books, RT Reviewers’ Choice Awards, received 2015 & 2017 INSPY Award nominations, and received a 2020 Christy Award for her novel, The Painted Castle. She's been featured at Once Upon a Book Club Box, CBN, Lifeway Women, Jesus Calling, Country Woman Magazine, MICI Magazine, Faithwire, (in)Courage, and Bible Gateway.

Kristy lives in Indiana with her husband and three sons, where she can be found penning her next stories in a beloved coffee shop corner with kayaks on the wall. (She's only bumped her head twice...)

To connect with Kristy, visit: kristycambron.com

Another great read by Kristy Cambron and she sure didn't disappoint. This quickly became a riveting read, and once you start you won't want to put it down.
We all know the story here, the lawless acts perpetrated on these people and an entire race or religion. So much hate, but we are with those who actually led a double life and worked with the Resistance, and risking all they had including their lives.
We walk in the shoes of those who work to counter the acts of those who are committing these horrendous acts on the people of Europe.
We put faces on these people, and one is the title of this book, what a talented woman, but a woman who cares deeply and uses her talents for the good of mankind. Can you even imagine doing what these people did, pretending you agreed with these terrorists, and using all of your gifts to subterfuge them!
This book is a great reminder that we need to never forget, and never repeat!
I received this book through Net Galley and the Publisher Thomas Nelson, and was not required to give a positive review.
at February 16, 2021