Oliver: The True Story of a Stolen Dog and the Humans He Brought Together by Steven J. Carino, Alex Tresniowski 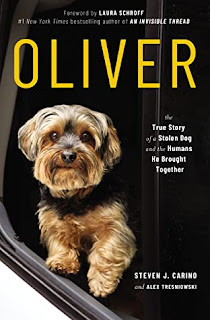 He Was Searching for a Lost Dog. He Found More Than He’d Ever Hoped For.

On Valentine’s Day 2019, someone stole Steven Carino’s dog, Oliver, from his car. Having lost his mother at thirteen and grown up with an alcoholic father, he could always count on his dogs for comfort and company. But now, with his beloved Oliver missing, Steven felt utterly alone.

Then, the miracle. In a series of near-impossible coincidences, people from different walks of life crossed paths with Oliver and with Steven. Hardworking immigrants, wealthy suburbanites, car mechanics, deli workers, old friends, close relatives, street cops, gang members, a TV news reporter, social media followers around the world, and one very gifted hairdresser all played a part in Steven’s desperate journey to find Oliver. In the middle of it all, Steven realized that no one is ever truly alone--and that the power of community can be life-changing.

Oliver is not just a book about a stolen dog. At its core, it’s a story about kindness, friendship, and the power of faith. As Steven says, “This is more than just a dog story. This is an everybody story. This is a love story.” 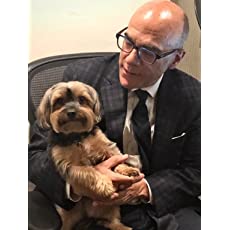 Steven Carino was born in Huntington, New York. The youngest of five children, he graduated from SUNY Brockport with a Bachelor of Science in American History. He worked as a DJ in New York City before launching careers in advertising and real estate and starting his own employment agency. Today, Steven has his own driving business and lives in a cottage in Bedford, New York, with his best friend, Oliver, and an array of sheep, goats, chickens, a horse, a rooster, and a mini-cow named Anna Belle. Oliver is Steven's first book.

This is a story that really pulls at your heart strings. A man whose life has been affected by so much loss, and the love of a little dog, and the touching of so many lives.
Would I be able to forgive, I hope so, someone who hurt me so terribly by stealing my dog? Can or could I live my faith and offer forgiveness, that is what we hope Steven is able to do, and to come of terms with the loss of Oliver.
What I didn't expect was the out pouring of love and help that comes from such a loss. Family and friends, and strangers all take the loss of Oliver personally, and want to do all they can to return him to Steven.
This is a quote from Steven and it sure does apply to this story "As Steven says,'This is more than just a dog story. This is an everybody story. This is a love story.'"
I received this book through Net Galley and the Publisher Thomas Nelson and Zondervan, and was not required to give a positive review.
at February 10, 2021