A Victorian twist on Shakespeare’s Taming of the Shrew just in time for the holidays.
Lady Elsie Bevue has spent the last two years in Wales, a supposed punishment for slapping an earl, her mother’s beau. Unrepentant, Elsie explores the countryside on horseback, riding astride like a gentleman—not at all like the demure lady her family demands of her.
Mr. Fitzburgh Smith is determined, both in his bachelorhood and business acumen. While the titled peerage struggles with the mercurial economy, Fitz has come into his own, rising from a lowly yeoman to a powerful man of finance. His success allows him to turn the tables on his childhood bully, Elsie’s brother—a man whose gambling debt has reached obscene levels.
Without warning, her family arrives on Elsie’s doorstep—the earl in tow. After purchasing the local bank, Fitz calls on the Bevue estate to give Elsie’s brother a gentleman’s warning. His visit rekindles his hidden tenderness for Elsie and encourages her defiant behavior. Her lack of decorum reignites the earl’s wrath, threatening her family’s already tenuous future. Fitz and Elsie form an unlikely bond but both must relinquish their pride before the earl exacts revenge—or lose their chance at freedom, and love.

Elsie entered the house through the servant’s doors and slipped into her father’s study. She froze—gone were the stacks of novels on the desk and chairs. The pen and papers strewn across the neglected desk were tidied, her father’s journals tucked back into their snug positions on the bookshelf. A lump formed in her throat as she ran her hand along the edge of the desk, overwhelmed with competing emotions. She was grateful for Doris, the housekeeper and even a touch guilty at adding to the woman’s full day of work, but there was a suffocating element to the tidiness. When Elsie’s father was alive, he’d been a walking, benevolent hurricane; mess and disarray followed and gathered around him, herself included.
She caught her reflection in the window, her hair spilling out of its plait and a smudge of either grass or mud on the shoulder of her riding habit. She was her father’s daughter, through and through. The door opened behind her—she inhaled sharply, praying for courage.
“He’ll be here shortly,” her butler said softly behind her.
Elsie spun around in time to see the butler shut the door—and the back of a tall man. “Oh.”
The stranger turned, surprise in his pale blue eyes. His plain face had a smattering of freckles and his coat was modest but well made. He dipped his head of ordinary brown hair but said nothing.
There was a familiar quality about him but Elsie couldn’t place how she knew him. “Have we met?”
His eyes softened. “We have.”
Two words weren’t enough to dissect his background and that was the least of her worries. She shouldn’t have asked and she shouldn’t be in the study alone with him. And yet she stayed. Her family was due any moment. She’d paid dearly for her unruly tongue, being alone with this stranger was far worse.
Recognition lit his face and without a word, he opened the door. Being alone with a woman wasn’t on his priority list either. Elsie stepped forward, too curious to let him leave. A burst of loneliness pricked her heart. Until that moment, she hadn’t realized how long it’d been since she last spoke to someone her age.
The man extended a hand, his smile inviting. “Fitzburgh Smith.”
“Elisheba Bevue.” Elsie slipped her hand in his. A warmth, a feeling of both safety and adventure hummed beneath his touch.
He arched an eyebrow. “Did you mean Miss Bevue, as in the sister of—”
“I’d prefer if you forgot that part.” She felt the flush of her cheeks. She’d not meant to speak the words. She didn’t want to be reminded of her brother just yet. Or any other family member.
“Done.” Mr. Smith cracked a wide smile, transforming his face from plain to merry—a joy Elsie didn’t think she could forget. There was kindness instead of judgment.

The Rainbow by Carly Schabowski

here, on the dusty floorboards, was a piece of paper, folded neatly. A newspaper article, written in German, alongside a faded picture of... 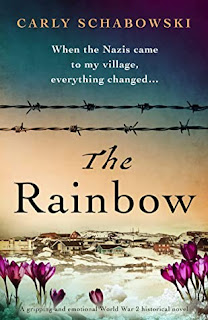