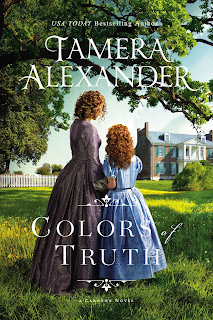 Based on the real history of Carnton, an antebellum home that served as a Confederate hospital, Colors of Truth follows the journey of an Irish immigrant arriving in a country where her kind isn't wanted, and of a former Federal soldier returning to the scene of a battle that almost destroyed him.

In 1866 Catriona O'Toole arrives in the town of Franklin, Tennessee, searching for her younger brother, Ryan, who, according to his last letter, was headed for Franklin only days before the catastrophic Battle of Franklin. Ryan's last note contained a stack of cash--enough money to bring his entire family across the ocean from Ireland. But after disease and illness tear through County Antrim and the O'Toole family, only Catriona and her seven-year old sister Nora are left to make the journey.

Wade Cunningham, one of ten operatives in the newly formed United States Secret Service Agency, is on the hunt for counterfeiters. A tip leads him to Franklin and to Carnton, the home of wealthy Tennessean John McGavock. The recent murder of a fellow agent mandates that Wade keep his true identity hidden, as well as his past service in the Federal Army. But when he receives a note bearing only the name of the deceased agent, he realizes someone in town already knows who he really is.

As evidence in the case mounts, it eventually points to Catriona, but Wade is slow to want to believe it. Because his heart is swiftly becoming hers. However, Catriona's sole focus is to find her brother and to provide a home and safety for her sister. In doing that, she somehow finds herself part of a burial committee for the over two thousand Confederate soldiers who were hastily buried in a field following the Battle of Franklin--and her deepest fear is that Ryan's body is among those shallow graves. 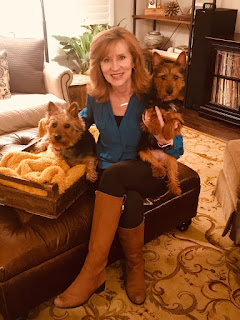 Tamera Alexander is the USA Today bestselling author of numerous books, including With This Pledge, A Lasting Impression, A Note Yet Unsung, To Whisper Her Name, and To Wager Her Heart.
Her richly drawn characters and thought-provoking plots have earned her devoted readers worldwide, as well as multiple industry awards.
These awards include the Christy Award for Excellence in Christian fiction, the RITA Award for Best Inspirational Romance, the Gayle Wilson Award of Excellence, Bookseller’s Best Award, and being listed among Publishers Weekly and Library Journal’s Top Inspirational Fiction, among others.

Tamera's books have been translated into numerous languages. She's toured Germany and The Netherlands meeting readers and cherishes those connections.
Tamera was inspired to become a writer by her mother-in-law Claudette who gave her a book that Tamera took one look at and thought, "Mmmm...not interested." (So much for 'Don't judge a book by its cover!') But being a Southern gal, Tamera thanked her sweet mother-in-law profusely, then shelved the book for a later date. A few weeks passed, and Tamera got a phone call one afternoon. Claudette had died very suddenly of a brain aneurysm at age 58. In the following months, Tamera happened upon that little book again, the one Claudette had given her. But this time, she sat down and read it cover-to-cover—and her long-ago-tucked-away love of writing was given new life! The book? Love Comes Softly by Janette Oke.
Tamera writes her novels at home in Tennessee and treasures being a writer. But mostly, she cherishes her connections with people—both real and imagined.
She hopes readers who pick up one of her novels will be swept away into another time and place, that they'll fall in love with the characters and gain insights into the history of the setting and people of yesteryear. But most of all, when a reader turns that final page in one of her novels, she prays they will have taken a step closer to Christ. Because she believes that having a relationship with Him is the most important decision you'll ever make in this life—and the next.
After living in Colorado for nearly two decades, Tamera and her husband now make their home in Nashville where they enjoy life with their two adult children who live nearby, and Murphy and Bailey, two rambunctious but oh-so-lovable Australian Terriers.

What a treasure we are gifted with by this author, a compelling page turner and the best of historical fiction.
You will be transported to the time in our nation of reconstruction, and of course, there is greed, but this time the perpetrators are professionals in their trade. and thus we meet the newly formed Secret Service, in the form of a kind hearted man.
We also meet a young woman and her seven-year-old precocious sister, who really keeps her on her toes. They are newly arrived from Ireland, having recently buried the rest of their family. We walk in the shoes of these people through the words of this author, and cringe at the smell of death, and hope it is not family for them.
You don't want to miss this one, but warning you won't want to leave!
I received this book through Net Galley and the Publisher Thomas Nelson, and was not required to give a positive review.