Noelle: A Novel (A Dog Named Christmas) by Greg Kincaid 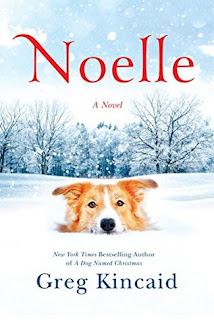 From the New York Times bestselling author of A Dog Named Christmas comes this heartwarming Christmas story about the power of family and the strength and love that comes from our pets.

In this fourth installment of the poignant stories of the McCray family and their lovable canines in rural Kansas, matriarch Mary Ann McCray is determined to shake up Christmas by accepting the role as Crossing Trail's first woman Santa Claus. Mary Ann, always a bit of a rebel, is looking to offer a more progressive voice in the staunchly conservative town at Christmastime and has a few ideas up her red velvet sleeves.


Growing up, my mother read to me and my sister every night and soon both of us were very good readers. I spent my childhood floating down the Mississippi with Tom and Huck, helping Atticus Finch defend Tom Robinson, and exploring Middle Earth with Gandalf and Bilbo Baggins. It was a rich time. When I wasn’t reading, my dog and I wandered for miles along stream banks, just pretending--the childhood precursor to adult creativity. In 1982, I started to work at a large corporate law firm. It was often tedious work and I wasn’t particularly enthralled with  the nuances of corporate law. Needing an escape, I returned to my old friends. I never had a book far away. I started writing my own stories. When my children were born, I combined reading and storytelling to keep up the family tradition of story time. Eventually, I returned to that small farm in Kansas where I grew up, now legally representing people with very different problems. Many of these clients were children in trouble. When I visited them in jails, halfway houses, and treatment centers, I was shocked to see one thing consistently missing from their lives and homes. Books were all too often nowhere to be seen. It was not a hard leap for me to know what these children were missing.
I have spent the last twenty years writing and advocating for literacy.  During this period, my children suggested that I should write my stories down. My first book was Death Walk at Acoma, a young adult novel published in 1993. Although the book had little commercial success, I kept at it. Over ten years later, with a few unpublished novels in between, I wrote A Dog Named Christmas. It was made into a movie released by CBS as their Hallmark Hall of Fame presentation in November of 2009 and was viewed by over 12 million viewers. The movie won a Genesis Award for raising public awareness for sheltered dogs. The prequel, Christmas with Tucker, was release in November, 2010 and went on to the be one of the highest viewed original productions on the Hallmark Movie Channel in 2013.  I continued this series of Christmas books with the 2012 book, A Christmas Home.  The latest McCray family story is Noelle, scheduled for release in October 2017!

Today I remain busy working at my law practice, writing, and advocating for childhood literacy and for a more humane world for our fury friends.
Website

A delightful story of a dog that is having problems becoming a service dog, or is she. The author had a previous book about a Dog Named Christmas, and we are reunited with this now elderly dog.
There are several messages offered here, and one is letting our children grow up, and letting go. There is also the breakup of a marriage, not a fun topic, but we see the pain and suffering that goes on with the young children, and this is where our little No-elle comes in, and will she be able to bring some joy back into their lives?
A story that ends with some unfinished business, and maybe another book, we can hope. The stereotypes are broken here and we meet Ann Claus, but love the way she handles the requests of children.
A wonderful new Christmas book, and maybe it should be a TV movie?
I received this book through Blogging For Books, and was not required to give a positive review.
at November 02, 2017