CelebrateLit Presents Out of the Ordinary by Jen Turano Spotlight & Giveaway 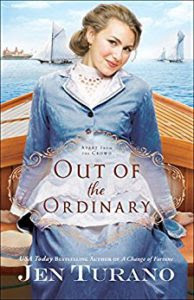 Name of book: Out of the Ordinary
Author: Jen Turano
Genre: Christian historical

“With all the charm of a Regency romance, the humor of a drawing room farce, and the swoonworthy delight of a fairy tale, Turano’s first Apart from the Crowd historical absolutely sparkles.”–Publishers Weekly on Behind the Scenes

Working as a paid companion may be quite commonplace, but Miss Gertrude Cadwalader’s eccentric employer makes her job unpredictable, to say the least. She finds herself carrying out an array of highly unusual tasks, including wearing peculiar outfits and returning items the woman pilfered. But when the wealthy Mrs. Sinclair catches Gertrude sneaking around the Sinclair yacht with some of the missing items in her possession, she immediately jumps to the wrong conclusion.
Shipping magnate Harrison Sinclair is caught in the middle of a misunderstanding between his mother and Gertrude, but he can’t help coming to his friend’s defense. Even as he hopes their friendship might become something more, Harrison is unprepared for the outlandish escapades that seem to follow the lovely, anything-but-ordinary Gertrude at every turn.
“The second installment of Turano’s Apart from the Crowd series is laugh-out-loud enjoyable. The foibles of the characters, balanced out with a light-hearted yet meaningful love story, is a true treat. . . . All of the threads are tied together in the end, even the small mysteries and side stories. It makes for a very satisfying read when the last page is turned.”–RT Book Reviews 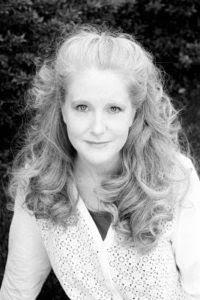 Jen Turano, author of nine books and two novellas, is a graduate of the University of Akron with a degree in clothing and textiles. She is a member of ACFW and lives in a suburb of Denver, Colorado. Visit her website at www.jenturano.com.

Q & A with Jen Turano

What Readers Want to Know from Jen


Hey Everyone! Thank you so much for stopping by today. Because I’m in the midst of a first draft, and in case you don’t know, I don’t actually care for first drafts – all those pesky blank pages, but…I’m getting off track…where was I? Oh yes, why I brought up first drafts in the first place. You see, I’m a little scattered when I’m doing a draft, and because of that, and because my mind is a scary place to visit while filling up those already-mentioned blank pages, I was having a tough time coming up with a post for Celebrate Lit. That’s why I reached out to my fabulous readers, and…here are some of the questions their inquiring minds wanted to know about me or my books. I hope you enjoy them!

Why write in the Gilded Age?

When I started writing historical romance after experimenting with other genres, I didn’t write Gilded age but Regency pieces. However, when I ran across the book “The Court of Mrs. Astor in Gilded Age New York” by Greg King, I was intrigued, and a little baffled about how it came to be that I was so unfamiliar with that riveting time in history. It’s an era where unprecedented fortunes were made at a remarkable rate, those fortunes responsible for so many scandals that I’ll have enough fodder for stories to last me for years. The antics of the members of high society are vastly intriguing, as are the fashions of the day, which is exactly why I’ve never had second thoughts about choosing to write Gilded Age romances.

How do you come up with such unusual names for your characters?

I get asked this a lot. And, contrary to popular belief, I don’t make up the names of my characters. I search through obituaries from the 1800’s, peruse books on the New York Four-Hundred (those were members of high society – chosen by Mr. Ward McAllister, the social arbiter of the day,) and I also scour old census records. I do occasionally pair a first name with a different surname so that my main characters aren’t real historic figures because that can get tricky. Not long ago, while reading through Memoirs of Allegheny County, Pennsylvania: Person and Genealogical, Volume 1, I found a bit on my great-grandfather, which was cool – not that I’ll be using him, but I might have a character modeled after him at some point in time. Another interesting tidbit about choosing names is this – names only work for me if the characters decide they like the names I select for them. If they don’t like the name, they simply stop cooperating. I can’t write their stories until I choose another name. An example – I was recently going to name a heroine Georgianna – but it was like trying to write through mud. As soon as I changed her name to Myrtle, I was back in business.

What is the most ordinary thing you enjoy doing?

I love to shovel snow.

Who is responsible for your book covers? Do you choose the model/setting?

Bethany House’s design team does all of my covers, and occasionally they hire out the job to other design houses. The only input I give is when I send in a character/setting sheet, describing my heroine and listing a few scenes that I feel might be good for the background. In “Out of the Ordinary,” I suggested having Gertrude on or near a boat, and the design team then hired a model who resembled my character sketch and put her on a boat.

Which character has been the most difficult to write?

All of my characters give me trouble at some point in time, but recently, Mrs. Davenport was the character who was being incredibly difficult. For the first three edits of “Out of the Ordinary,” she was too complicated and a bit on the dark side, but after I changed her backstory, and remembered she was supposed to be eccentric, not deranged, she turned into a delightful lady, one I enjoyed writing.

What’s the craziest thing you’ve ever Googled while doing research for a book?

I don’t know if this is crazy, more on the lines of idiotic, but I once googled Gentleman’s Clubs when I was looking for an all-male club my hero would want to join. That was a definite mistake, especially since I didn’t include a very important word – historic. Well, the next thing you know, all sorts of naughty sites were flashing in front of my eyes, and to this day, I still get advertisements for singles looking for a good time and all sorts of other interesting…offers.

Have you always wanted to be a writer?

Nope, it never entered my head to pursue a career in writing, nor was I ever a person to even keep a diary or a journal. I’m pretty sure I wanted to be a movie star when I was younger, but when that didn’t pan out, I majored in fashion and spent quite a few years working for department stores. It wasn’t until my son was in third grade and we wrote a book together just for fun that I began entertaining the thought of trying to see my stories in print.

How long did it take you to break into the publishing world, and how many books did you write before that happened?

What everyone needs to understand is that publishing is a cut-throat business. I had no idea when I decided to try and get published what the competition was like, and if I had, well, I might have nipped the whole idea of getting a book into print right in the bud. But, because I knew I only wanted to go the traditional route, it soon became clear, what with all the suggestions I was getting about the work I was sending out to agents, that I needed to up my game…a lot. I experimented with quite a few different genres – middle grade, YA, contemporary women’s fiction, Regency romance, and then Gilded Age, getting really proficient with query letters in the process. It wasn’t until I started writing historical romance, though, that I really began getting requests for full manuscript. After I’d been writing for about three years, I finally signed with an agent. She never sold the book she signed on to represent, but after I wrote “A Change of Fortune,” she sold that within two months. Long story short – it took me about seven years to get published from the time I wrote my first book, and…I have seven manuscripts that will never see the light of day because they’re awful.

Is there a reason you include so many animals in your stories?

I’ve always been an animal lover, and as such, I really enjoy writing different animals into my scenes. Dogs are my favorites, followed by pigs, and most of the characteristics my animals have are traits I’ve seen in real life. Matilda, the pig in “A Match of Wits,” was inspired by a pig I used to see in New York. She was so quirky, as well as intelligent, that I knew I would have to write a pig in at least one of my stories. This current series does not have as many animals because I do want to keep my stories fresh. But, having said that, my next series finds my heroine visiting a farm, and well, I don’t know many farms that don’t have animals, especially adorable cows by the name of Buttercup that may or may not have the odd tendency of moseying into the house to eat pie whenever the urge strikes.

Last question – Have any of the crazy antics in your books been inspired by real-life events???

I seem to be a magnet for weird things happening, so…yes, quite a few of those antics were inspired by real life events. I’ll share just one since I do need to get back to that first draft. I live near Denver, and when my son was little, we used to visit the Denver Zoo. That zoo just happens to have a very large flock of peacocks – peacocks that took one look at me one day – and I must add that I wasn’t doing anything except pulling my son in a wagon, and the next thing I knew, I was being chased through the zoo by what seemed to me to be the entire flock of peacocks – all seemingly intent on trying to murder me. Funny how fast a mom can run while pulling a wagon when in fear for her life. My son thought it was fabulous fun, and bless those members of the staff who came to my rescue. They were almost successful in not laughing, and…I received a free lunch after the dastardly peacocks were chased away. That event is what inspired me to write a mad flock of peacocks in “In Good Company.”

Thank you so much for visiting me today. Hope I answered a few questions you may have about me! 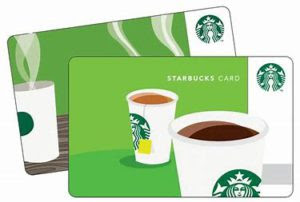 To celebrate the tour, Bethany House is giving away a grand prize of Two Jen Turano Novels and a $20 Starbucks Gift Card!!
Click below to enter. Be sure to comment on this post before you enter to claim 9 extra entries! http://www.rafflecopter.com/rafl/display/4664b04914/
at November 11, 2017