Shaken: Discovering Your True Identity in the Midst of Life's Storms by Tim Tebow 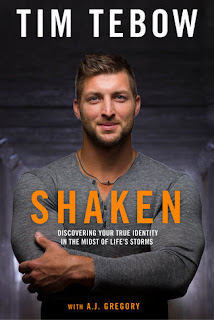 First, he was a beloved college football champion, Heisman trophy winner, media sensation, and best-selling author drafted in the first round of the 2010 Draft. Then he had a miracle playoff run with the Denver Broncos before being traded to the New York Jets. After one season he was cut by New York. Next he was signed by the New England Patriots then let go after training camp—a scenario that repeated itself the following summer with the Philadelphia Eagles. Tim Tebow has achieved big victories and plunged the depths of failure, all while never letting go of his faith, even in the face of doubt and disappointment. In Shaken he explains why neither the highs nor the lows of his life can define him—and he reveals how you, too, can find confidence in your identity and know who you are. In revealing passages, Tebow pulls back the curtain on his life, sharing the vulnerable moments of his career that have shaken him to his core—while also teaching the biblical principles that will enable you to keep the faith, no matter what comes your way. 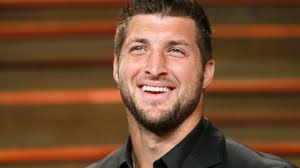 TIM TEBOW is a two-time national champion, first round NFL draft pick, and Heisman trophy winner. After playing in the NFL for the Denver Broncos and the New York Jets, Tebow joined the SEC Network. In addition to his role on SEC Nation, the network's traveling road show, Tebow also contributes to a variety of other ESPN platforms. Through everything Tim's true passion remains the work of the Tim Tebow Foundation which he began in 2010. The foundation's mission is to bring Faith, Hope, and Love to those needing a brighter day in their darkest hour of need. The foundation is fulfilling that mission everyday by serving thousands of deserving children around the world.

Click Here to download the first chapter of Shaken by Tim Tebow About Shaken by Tim Tebow Who are you when life is steady? Who are you when storms come?   Most of us have been on the receiving end of rejection, a broken dream, or heartbreak. And while this is not an easy space to go through, when we are grounded in the truth, we can endure the tough times. In this powerful book, Heisman Trophy winner Tim Tebow passionately shares glimpses of his journey staying grounded in the face of disappointment, criticism, and intense media scrutiny. Following an exceptional college football career with the Florida Gators and a promising playoff run with the Denver Broncos, Tebow was traded to the New York Jets. He was released after one season. In Shaken, Tebow talks about what he’s learned along the way, building confidence in his identity in God, not the world. This moving book also features practical wisdom from Scripture and insights gained from others who have impacted Tebow in life-changing ways. Though traveling hard roads is not easy, it’s always worth it!

I have long admired Tim Tewbow, taking a knee to show his love of the Lord, not to down our Country.
Tim Tewbow lives his faith on his sleeve, and this book only made my respect for him go higher. I loved how Tim points out in Chapter 7, What Is Normal, a young girl going through her life with CP, and accepting all that she has been handed and just figured she was normal and this is the way it is, which is true, until a bully raised their head.
While reading this book you might want to have some tissues handy, when we get to the part at the prison and death row, awe I loved Cell 4 on they suicide watch. God using people that love him, and sharing his word, what more can we want!
This story is really not about football, and yet it is part of Tim, as we journey with him and his special love of kids and working with WI5H, what a heart he has for them, and loved his sharing them with us.
We begin with Tim’s early life to the present as he shares his gifts with us and how he goes about doing what he feels the Lord would want him to do, a book you will not want to put down.
I received this book through the Publisher Waterbrook, and was not required to give a positive review.